How to Green a Restaurant, Part 1: Ike’s Quarter

Are you considering being a green restaurant? Consider the example of Ike’s Quarter Cafe, a New Orleans style restaurant in the gold rush era town of Nevada City, California. When I mentioned to my hair stylist yesterday that I would be writing about it, she said, “Oh really? I had no idea they were a green restaurant. I just thought they had good food.”

I think Ike would be pleased. As he said when I spoke to him, “Everybody needs to eat,” and he has worked hard to create an environment and a menu that is welcoming to a broad range of the public. Though he is a graduate of the San Francisco Culinary Academy, and a long time fan of and participant in healthy minded restaurants, he found that they were a bit exclusionary to those not of a deeply healthy inclination. 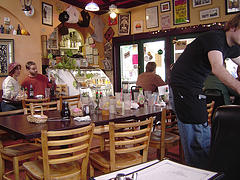 But inside that, he had a deep personal commitment to creating a restaurant that had minimal impact, and a maximum benefit, to the earth, for his customers, and his staff. Only recently has Ike’s Quarter been a certified green restaurant, via the Green Restaurant Association. They ask that you do 15 measures to start, then 4 new measures each year. For him, that was in some ways a challenge, as they’d already done so much.

So what have they done?

For starters, almost none of their waste becomes, well, waste. As Ike says, “There’s so little that’s truly trash, so much of it is recyclable and compostable.” They convert their grease into biodiesel, and their food and paper waste, all of it, goes to “Seth the Dirt Man,” a person who just showed up and offered to take it all away, to make, well, dirt. It seems, when you put it out there, resources start showing up.

What else? Just about all their to go materials are either biodegradable or compostable. And in the case of their foil wrap, recycled. They’ve really done their homework, and have found the best, most durable supplies out there. In the second part of this article, we’ll tell you what they recommend.

Their recent remodel includes Greenguard certified wood, which means that it has no formaldehyde in it. The stains and lacquer are all naturally based. They’ve replaced all their cleaning products with GreenSeal certified products . And in a measure that may have bypassed others, they have their appliances regularly maintained, as things like the refrigerator leaking freon make it work harder, consuming more energy.

But what about the food? This is where Ike’s shines. They put a heavy emphasis on using local resources, organic if possible. As this is a place that gets snow, they shift where some of their produce comes from during the off season here, but only to nearby Susanville for Five Dot Ranch for meat, and produce from Sacramento, an hour southwest, via a company called Produce Express.

Ike had an interesting perspective on the recent focus on organic meat and produce. Though he very much supports it, he supports local sourcing even more, and rather then get ingredients from thousands of miles away merely because they’re organic, he just won’t carry certain ingredients if they’re out of season in the area. 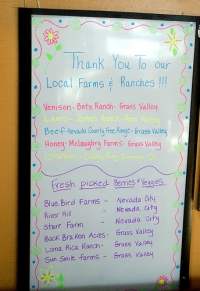 They also take this local commitment further, to include who does their linen service, who they hire for contracting, and who does their maintenance.

Ok, so they’re a green restaurant, but when it comes down to it, it’s about a tasty meal, served well, with good company. Whatever you do, you must have their corn bread. You can die happy after. And if you look up on the wall in the front left corner, you’ll be glad to see just where everything came from. A most satisfying touch to your meal.

Stay tuned for the part 2 – Greening how you do take out: What Works