The Social Capital Markets conference in San Francisco featured a number of great panels on impact investing. One in particular that caught my eye was called “Unearthing impact investment: how major institutions are deploying capital for good.” The panel was advertised to cover topics we “don’t normally think of as impact investors” and how they “are leveraging their assets and capital – all with the purpose of covering their bottom line while doing good.”

“Impact investing has gotten so broad that it may have lost meaning,” said moderator Alice Gugelev of Global Development Incubator, in part of her opening remarks.

James Gifford, Director at Tau investment management, agreed. His firm helps upgrade garment manufacturers in southeast Asia. ” It doesnt look like impact onvesting in a traditional sense, but we believe by working with these organizations, we can make a big impact….the garment industry can pull the world out of poverty.” Many of these factories still pay workers in cash, he indicated, which leads to theft, loss…lots of problems. “There’s [USD] $12 trillion in cash circulating around the world.” 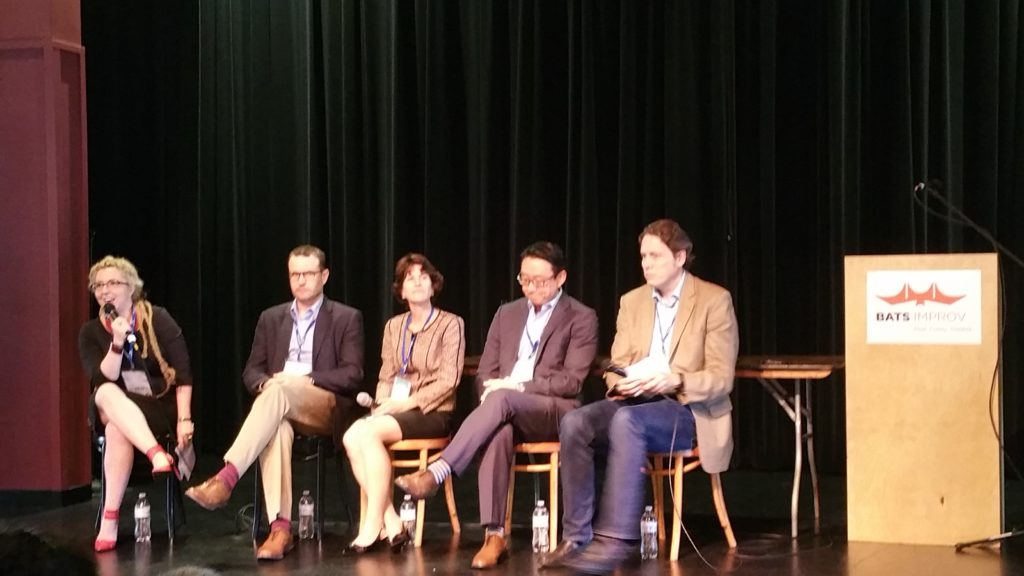 Joan Larrea, CEO of Convergence, a company that is building the field of blended finance, said that our view of traditional impact investing is missing the partners that can help bring bigger money, connections, and other economies of scale. “It’s possible a private sector deal may have partners and partial funders that don’t think about impact at all…and that’s ok.”

Larrea argued that to get significant capital into impact investing fields, look at large competitors not as enemies but as potential partners. Mars and Danone, for example, stepped forward to be the main funders for a large supply chain fund aimed at reduction of injuries on site, number of women in workforce, etc. Great impacts, but the program may help Danone improve its supply chain in a very traditional way, she said.

Wellington Pak, Director of Business Innovation at FHI 360, leads strategy on impact investing. They have a foundation for which they are the sole backer. He gave the example of a community project that has had an impact and yielded multiple financial and social benefits. Manila Water started providing clean water to people who were living in ‘temporary’ housing. Previously they used to buy water from filthy trucks, which came with many environmental and health challenges. Manila looked at these people not as projects but rather as customers, said Pak. They made it clear that this was a paying customer and the economics of it should be clear, while many industry observers assumed they’d lose their shirt trying to do business with such transient people. The people ended up being 99+% payers. Now Manila water has credit history on 2 M people that previously had no chance at establishing that credit history. They eliminated all those truck emissions as well.

Steven Kehoe of Visa said they don’t call it impact investing, but many of the things they do look very much like it. They are not just a credit card company, he said, they are a financial transactions company.

“If we are able to connect more people at the bottom of the pyramid, it can lead to financial inclusion,” said Kehoe. Visa is looking at new business models that at the end of the day reach people and make financial connections. He made the point that all those people working at garment factories mentioned by Mr. Gifford would benefit from making their financial picture less cash-based. But it’s basically just good business for Visa…at the end of the day, their core business does better with more financial transactions. Visa looks for these types of pilot programs that can then scale. They’re ok with a lower rate of return, said Kehoe. For them the priority is on getting people to move to digitization of financial aspects of their life.

So if you’re an entrepreneur working and trying to create an impact, now you have some insights into how large organizations can help drive change and facilitate your impact!