Benjamin Williams and David Oyanadel are two University of Connecticut students who have started a business to bring solar power to Africa, Haiti, and Nepal. Their products include a refrigerated storage unit for medicine that can operate without being connected to an electrical grid. Those are rare in many developing countries. They also are marketing a solar power system to charge phones, laptops, and other digital equipment. 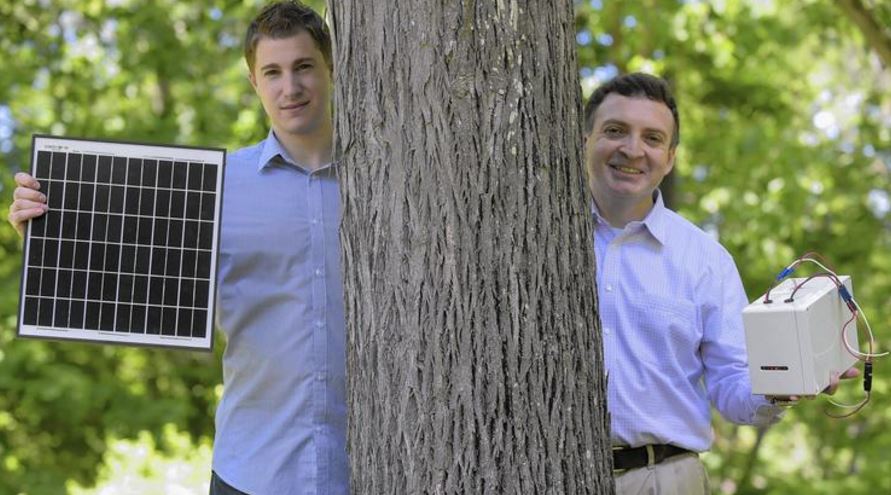 The business is called Innovative-Diffusion LLC. The pair have found their biggest hurdles are finding reliable distributors and doing business in environments where transparent business transactions are a rarity. “It’s a huge challenge,” Williams says. “You’re talking about corruption like you’ve never seen. If you don’t have the money to pay, your product is going to stay in the port.”

The 10 month old company, which is based in Willimantic, has  generated a modest $40,000 in revenue so far. Williams says he and his partner have not needed to raise private capital yet. They have enlisted the aid of Howard Pitkin, former commissioner of the Connecticut banking department, who has agreed to serve as the company’s advisory chair. Pitkin met Oyanadel when he was teaching at UConn. He is now teaching at Central Connecticut State College.

“We take too much for granted in America,” Pitkin said. “It seems to me this effort has the potential of changing a lot of people’s lives.” Oyanadel conceived the idea for the business when he could not reach his family when they lost electricity after an earthquake in Chile in 2010. “We couldn’t make a simple phone call in Wilimantic,” said Williams, who is working toward a graduate degree in business. His family’s home was demolished in the earthquake and countless others were without electricity. That often led to loss of life, since earthquake victims had no access to communications, he says.

The company mission is about more than solar power. It also seeks to inspire young people to solve problems in their communities. “Our concept is to make a living, but at the same time create a service people can use and benefit from,” Oyanadel said. They seek to establish partnerships with NGOs and non-profits like Africaphilantropies. Based in Norwich, Connecticut, it has distributed Innovative-Diffusion equipment in Togo in western Africa. The company has also partnered with Clifton, N.J.-based Embrace Relief, which brings together volunteers who collaborate on humanitarian aid and disaster relief work.

Africaphilantropies was established by Zato Kadambaya, a native of Togo who studied engineering at UConn and is now head of the math and science department at New London High School. He met Williams at a coffee shop a year ago and the two struck up a conversation, beginning with, “What do you do?” “My interest is in helping Africa,” Kadambaya says. Without electricity, youngsters in small towns in African nations cannot read or study, limiting their education and opportunities, he said. “When the sun goes down, that’s it.”

Other humanitarian aid to Africa includes the DigiTruck that bring digital literacy to areas without electricity. Entertainer Akon is also heavily involved in bringing the benefits of solar power to the 75% of people in Africa without access to electricity.