What do bicycles and sustainability have to do with each other? If you are Shawn Walton of Atlanta, bicycles are a way to teach young people about recycling, growing their own food, and being good stewards of the earth. While an education major at Morehouse College, Walton rode his bicycle six miles from East Atlanta to West Atlanta every day, arriving on campus invigorated and ready to learn. But as a student teacher, he was discouraged by overcrowded public school classrooms and the sight of students with plenty of energy but few outlets for exercise. 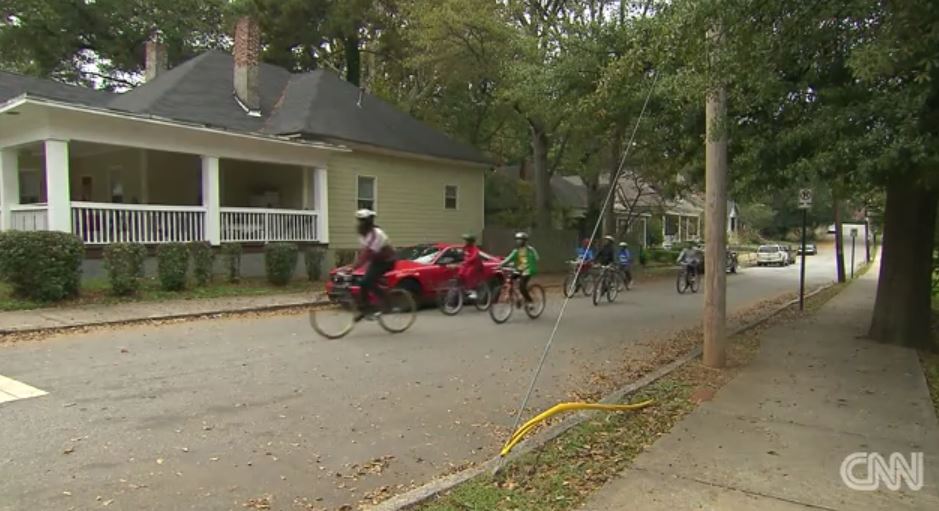 “I felt like they needed to be outside,” he tells CNN. “I felt that their energy needed to be worked off through physical exercise.”
He also noticed a lack of community involvement from teachers and other school staff members, something he feels is a necessity. “Allowing kids to see their leaders in the community brings a level of respect,” he said. “It takes a village, and the village is usually defined by proximity.”

Once he graduated, Walton founded WeCycle Atlanta, a nonprofit organization that uses bicycles to educate young people about the benefits of recycling and growing their own food. Working out of his garage, he purchased bicycles with his own money and recruited neighborhood children to participate in his first educational program. “I bought about 12 bicycles and asked some kids, and they said they wanted to be a part of the program and earn some bicycles,” he says.

The students began by renovating a neglected community garden nearby. For three weeks, Walton and his students revived it by planting tomatoes, squash and other fruits and vegetables. Walton rewarded his students by giving them their own bicycles. A few months later, the students were able to share their first harvest with family, friends and members of the community.

That experiment became the foundation for Walton’s #40HoursAndABike program. Four students, ranging in age from 10 to 18 years old, are selected once a month to participate. They are required to complete 40 hours of classes using WeCycle’s W.H.E.E.L.S. model, which stands for work ethic, health, economics, environment, leadership and sustainability. Walton says that limiting class size to four students allows WeCycle’s team to give each student the attention they need. “Smaller classrooms are important,” he said.

After two years, Walton decided it was time for WeCycle to find a permanent location. He began an online successful crowdfunding campaign to raise $20,000. His team now consists of five to seven people. All but two are volunteers. Walton and a bicycle mechanic teach students how to repair their bicycles. Walton also leads group and community bike rides.

The team includes a zero waste specialist who teaches the importance of reusing everything in the home and how not to have a wasteful impact on the community. An agricultural educator teaches students how to build pallet gardens so they can grow food year-round at home. Walton also brings in a yoga instructor who empowers the students to meditate and focus. “They know that once they grow their own food, they’re healthier, and they can keep money in their pockets and in their homes so they can invest in themselves and in their community,” Walton said.

Most of WeCycle’s bicycles are donated by neighbors or individuals who support his vision. The newer bikes, which are given to WeCycle graduates, are donated by a private corporate sponsor. “The partners are so instrumental because we not only want to show kids how to create access to bicycles and access to agriculture, but we also want to show them how to work together to solve a problem,” Walton said.

The program is popular with neighborhood children, Walton said, and he’s routinely approached by them to join. Participation is on a first come, first served basis. Once four students are chosen for each session, there is a wait list for the next session. Most of his students are from low-income or single-parent homes, but Walton says they’re the best of the best. “Our students are persistent, eager, talented, bright and beautiful, and they’re willing to learn,” he said. “No matter what other people say about them, they’re bright, and they’re smart, and I love to work with them.”

In three years, 75 graduates have come through the WeCycle’s program, which Walton hopes to take global. “WeCycle Miami, WeCycle Ghana, WeCycle Los Angeles. We want to take that worldwide.” Based on what he has accomplished so far, the odds are good that he will see that dream come true. Watch the video below to learn more about the WeCycle Atlanta program.