The Wheelys Green Warrior Bike Based Café Is Solar Powered 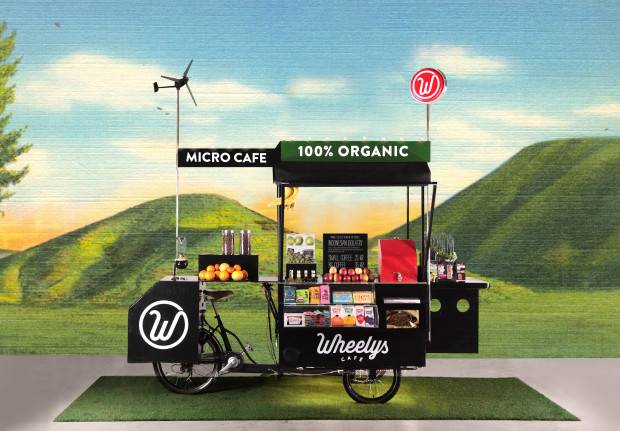 Who wouldn’t want to buy coffee at a café that is pedal and solar powered, cleans the air around it, and recycles coffee grounds into flowers? The whole idea makes so much sense, it’s a wonder why no one thought of it before. The bicycle-based coffee shop by Wheelys has been around for over two years. During that time, hundreds of them have been sold to “javapreneurs” in 40 countries.

Now, Wheelys has taken everything it learned from making the original pedal-powered coffee cart and put into the Wheelys 4, otherwise known as The Green Warrior. In addition to coffee-making equipment, it features a triple burner stove, a 3-basin sink with running water, an awning, a small solar panel, LED lights, a water heater, an audio system, a refrigerator, and a 3G WiFi router. It also has a couple of options, such as an integrated air purifier “that actually CLEANS the air from smog particles” and a small wind turbine to generate electricity. 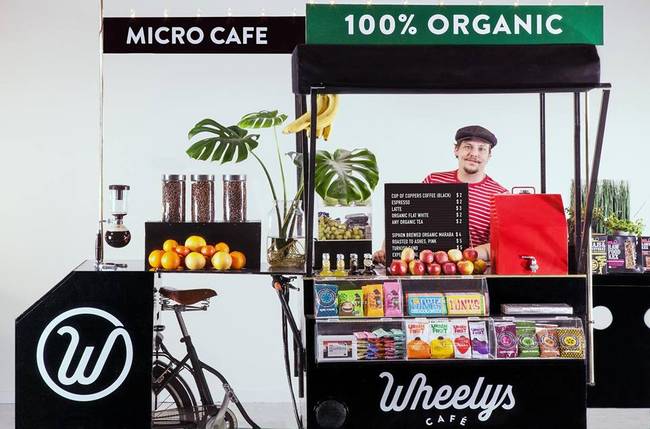 Wheelys says its bicycle baristas can turn their recycled coffee grounds “into small soil cubes packed with flower seeds, which we plant on the way to work.” In case you are skeptical, the company literature goes on to say, “No, we are not kidding!” The Green Warrior is the subject of an Indiegogo campaign that doubled its original goal in just three days.

According to TreeHugger, enterprising “pedalpreneurs” can reserve their very own Green Warrior for the startup price of $4,999. There is a $200 a month franchise fee, which Wheelys says makes it the least expensive franchise opportunity in the world. Daily revenues can total as much as $1,000 a day in a popular location.

Unlike a Starbucks store, which can cost up to $500,000 to get up and running, the Green Machine goes where the business is instead of waiting for business to come to it. Wheelys says it is the “fastest growing food franchise ever.” If you are looking for a true ecopreneur opportunity, the Wheelys 4 Green Machine has got to be at the top of your list.