Most EV batteries have plenty of life left in them when they are no longer able to power an electric car. Typically, they have 70% to 80% of their power still available. For automotive use, a battery must be able to charge and discharge rapidly and operate at high current levels. But even when that ability degrades, it can still work fine in steady state applications such as storing electrical power from the grid or from renewable power sources like wind turbines of solar panels. 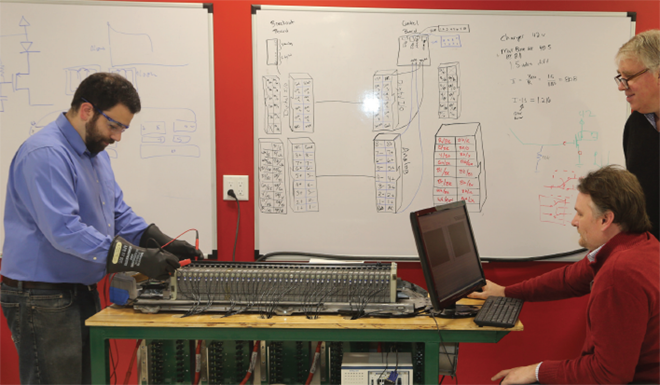 Most auto makers haven’t really thought very much about what to do with old EV batteries. They are too busy making new ones. That was the opening Dirk Spiers of Oklahoma City needed. In March, 2015 he started Spiers New Technologies. He hired two talented associates, engineer Bryan Schultz and algorithms research engineer John Junger. Recently he spoke to Charged EVs about what his company does.

“We call it life cycle management for advanced battery systems, and we offer the ‘4 R’ range of services within that – repair, remanufacturing, refurbishing and repurposing. It starts with the recovery of the core, which is the battery pack that comes out of a vehicle. We help the OEMs to bring all used cores to a central location and check them for any safety issues.

“Today, most of those packs are coming from dealers who have done warranty replacements and from things like test projects that have concluded. We collect all of the batteries’ data in the background, and have built some pretty advanced database management software.”

In order to operate at a profit, it is important for Spiers and his team to diagnose the batteries they receive quickly and accurately. That’s where Junger’s algorithms come into play. “We see packs that are still really good except for one problem that caused a system error. It’s not usually an independent cell that fails, because they’re manufactured to such a high standard. It’s usually a thermistor failure or a bolt on the bus bar that came loose, which are good candidates to be fixed and sent back to the original application.”

Getting auto makers to reuse a repaired battery is tricky. The company engineers naturally have a proprietary interest in making sure the refurbished battery pack will perform as expected. According to Gas 2, many of them were skeptical at first that Spiers and his team knew what they were doing. Spiers says most of them took quite a lot of convincing before they were willing to rely on SNT’s evaluations.

“We recently had some very long discussions with one OEM about the accuracy of our process before they came around,” he says. “OEMs know their battery packs really, really well. They’re really smart engineers and they know their stuff. But I like to think of them as being like early mothers. They give birth to their battery pack and they know it better than anyone else.

“But at some point, the batteries go out into the real world and things start to change. So we’re a bit like a daycare center that needs to prove that we’ll take care of their battery packs. Eventually we need to test them to be able to compare them to others, and because our testing methods may be different from the OEM’s, we need to explain why they are just as effective.”

Today, several of the companies SNT works with have adopted those evaluation tools for use internally. They find them to be faster and more accurate than the diagnostics they developed in-house.

Repurposed batteries can be used to store electricity in residential or commercial use. That stored energy can help balance the load on the electrical grid and make renewable energy work efficiently, reducing the use of fossil fuels, especially coal.

If a battery pack can’t be refurbished or repurposed, it still has many components that can be salvaged and re-used. SNT is becoming expert at harvesting parts that are still useful and reselling them on the secondary market. The company currently has 70,000 square feet of space at its Oklahoma City headquarters and is considering expanding.