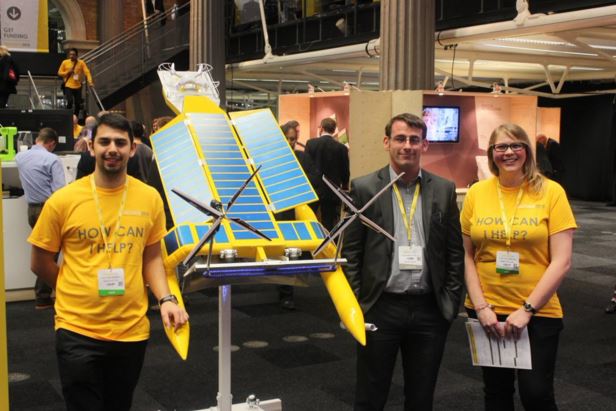 Plastic floating in the world’s oceans poses a hazard to marine life at every level of the food chain. Studies show that many plastics break down quickly into microscopic pieces that are toxic to fish and other aquatic life. Some scientists predict that by 2050, there will be more plastic in the oceans than fish.

The problem is growing exponentially. Last year during the 9 month long Volvo Ocean Race — a competition that visits all the world’s major oceans — the sailors reported a noticeable increase in plastic debris along the route. The Volvo Ocean Race is only held once every three years.

Bluebird Marine Systems is a UK start-up that thinks it has a partial answer to the problem. Last November at the Innovate UK show in London, it presented a prototype for a solar powered barge that could remove up to 24,000 tons of plastic from the ocean every year. The completed ship would be 144 feet long and operate autonomously. In the prototype, deck mounted solar panels and two wind turbines feed power to electric pumps and filters that then suck up plastic solids and micro plastics as the barge moves forward through the water. An onboard shredder rips and breaks up larger pieces of debris.

The company calculates that the finished robovac will be powerful enough to treat up to 24 million gallons  of seawater each year. “Working in a fleet, these autonomous robotic boats could keep plastic buildup contained and significantly reduce the existing ocean gyres in around 5-10 years, cost effectively,” the company says. A gyre is a circulating pattern of trash that collects in the middle of an ocean and swirls about, propelled by ocean currents. The Pacific Gyre between Japan and the west coast of the United States is estimated to be larger than the Australian continent.

The captured plastic is temporarily stored in a cargo hold that can carry around 150 tons of weight until it can be off-loaded or recycled, the company says. “With our system, all sizes of rubbish, from huge fishing nets to deadly micro particles, can be swept or sucked up, ground down and stored in SeaVax’s tanks,” project director Chris Close explained to the Express. The prototype cost about $200,000 to develop since work began a year ago.

Dr. Marcus Eriksen, research director at 5 Gyres Institute, explained to EcoWatch that many other open ocean recovery ideas have not met with much success. Mostly, he says, that is because plastics fragment quickly. They become small particles which are then widely distributed across the globe and are highly toxic after time at sea. They are “more akin to a smog of plastic rather than a consolidated patch,” he said. “Recovery is much more challenging than we thought, and the ocean is rapidly beaching it and sinking the smallest particles.”

Dr. Eriksen also noted that the harvest procedure must protect any ocean life that may find itself in the way of the barge or which has no ability to swim out of the way as it approaches.  SeaVax will feature automatic shutdown in case marine life is detected, as well as an SOS beacon to alert rescue workers of any marine life-threatening situations.

Erickson insists that the possibility of removing plastics from the oceans must not make people complacent about the problem. The best way to protect the oceans is still to prevent plastics getting dumped into the sea in the first place. “Catching [plastic] before it fragments into micro-plastic is worthy,” he said. “The biggest advantage to these clean-up contraptions is deployment upstream. That’s where the waste really is the worst. You’ll get your biggest bang for your buck, and you will save our seas from the greatest source of contamination. The further upstream you go, the more success you will have.”

Another worthy idea is to educate people that using the oceans as a global sewer is not a good long term plan for allegedly sentient beings to follow.