Suga Yoga Mats are Made from Recycled Wetsuit Materials

Last updated on by Andrea Bertoli

As a long-time surfer and yogi, I’ve long known that surfing and yoga have a great synergy: both offer great benefits for the body and mind, and the activities themselves complement each other. Yoga helps balance out the hard work of the muscles, while surfing makes the body stronger and more balanced. And now Suga yoga mats are bringing them together in a new way. 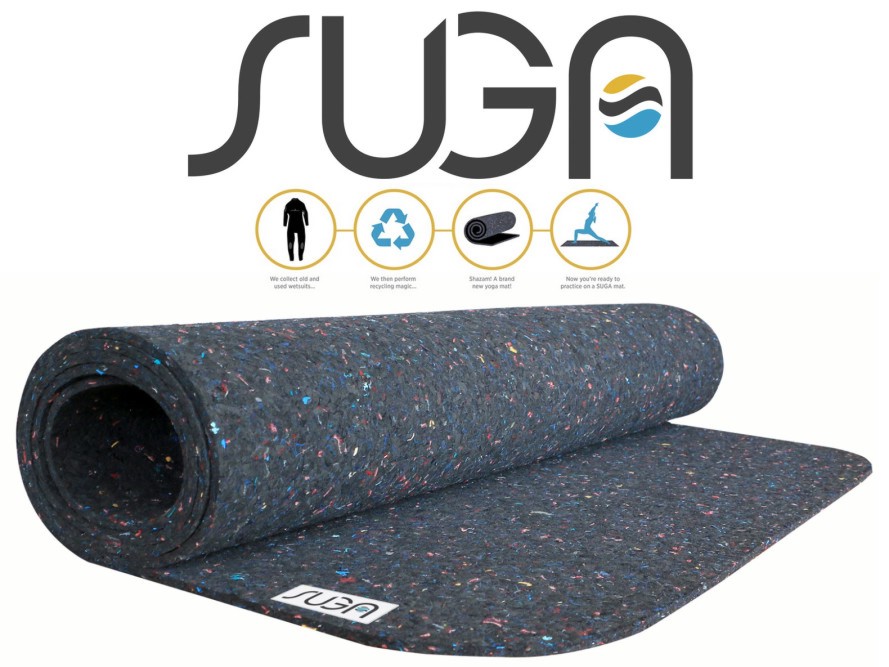 Suga is currently running a Kickstarter project from which the video below comes, and while they’ve reached their goals (congrats!), they’ve still got rewards available (including the mats themselves), so consider joining in their efforts over the remaining few days of the campaign to support this triple bottom line business.

But why neoprene? While it might not seem like a big waste product, especially when compared to paper, plastics, or styrofoam, about 300,000 tons of neoprene are produced annually, explains Brian Shield of Suga. The majority of these neoprene is used for wetsuits that are only used for one or two seasons. And in case you think it’s not a big marketing, Shields notes that annual global surfing wetsuit sales exceed $125 million USD. And that can make a lot of Suga yoga mats!

To learn more, check out what our friend Jeff had to say about this company on Sustainablog:

Startup Suga has figured out a way to keep these items out of the dump: they recycle them into yoga mats.

That’s not only great news for wetsuit waste, but as old friend Simran Sethi showed us years ago, that’s also a step forward for more sustainable yoga practice. As she noted back in 2008, an awful lot of yoga mats are made from polyvinyl chloride (PVC), which is pretty nasty stuff. Yes, there are mats made from other materials, but even as issues surrounding PVC have received more attention, it’s still the most popular material for these products.

According to Suga, recycling neoprene wetsuits into yoga mats not only avoids the use of PVC, but also results in a cleaner, safer product: “Because Suga mats are manufactured from neoprene, they’re uniquely closed-cell foam, which means they don’t sponge up bacteria, sweat, dust, and dirt from yoga studio floors like other mats.” The company notes that it also makes use of all of its scraps, and even plans to recycle worn-out Suga mats when they’ve reached the end of their useful life.