Last updated on by Tinia Pina 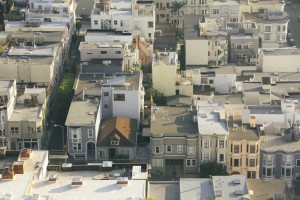 In the history of urban planning, one of the hallmarks of American society was the advent of the modern suburb. The economic expansion post-World War II saw a mass exodus from traditional urban areas to the seemingly endless expanse of land in the continental US. Neither urban nor rural, suburbs quickly became the new American normal. With the new suburb came a new order to how transportation, schools, communities, housing, and of course, how food distribution was structured.

According to the past two US censuses, the suburban sprawl has diminished in its total proportion of the American population. The last US national census was conducted in 2010, and reported more than 80 percent of people in the States now live in urban areas.1  Yet, how the average American buys their food is still predicated on suburban systems, including large grocery stores, pre-packaged foods, and produce that are trucked in great distances.2  Simply put, closed-loop systems are those in which at least part of the final output is fed back into the system as an input to create the next output. Closed-loop food systems are thus systems in which food waste is fed back into the system to create eatable food outputs. When executed properly, closed-loop systems can yield high quality food that produces a fraction of the waste.

Across the country, communities known as agrihoods are cropping up. The aim of agrihoods is to reduce farm to table time by having community-owned farms in a neighborhood. Many agrihoods are closed food systems; community food waste is gathered and repurposed as fertilizer or compost for the local farm. The idea holds great promise for the suburban landscape, though most agrihoods are also in areas that are prohibitively expensive for the average person to live. One Sacramento, California agrihood boasts houses in the range of $400,000 – $1,000,000.

While agrihoods are optimal for suburban living, they make little sense elsewhere. Another increasingly used type of food system that better speaks to urban areas is hydroponics. Hydroponic systems can be created at any scale and set up both indoors and outdoors. They use significantly less water – up to 90 percent less – than soil systems, as how much and when water is introduced can be easily adjusted to avoid runoff. Unlike agrihoods, however, most hydroponic systems are not closed food systems and instead use chemical-based fertilizer. The average hydroponic system therefore does not take into account food waste as the average agrihood does.

Re-Nuble is a company trying to change that. Its core products are fertilizer and fertilizer supplements based entirely on natural inputs (i.e. food waste). By automating the system of taking food waste to create viable chemical-free fertilizers, Re-Nuble hopes to create closed-loop hydroponics systems at scale. In this way, hydroponics promises to become a closed-loop food system that is appropriate for urban areas and affordable for far communities to access than agrihoods.

The remigration to urban areas of America means that how food is produced, sourced and discarded needs to be restructured. Re-Nuble is on the helm of this trend through its contribution, to creating closed-loop hydroponic systems. To follow the company’s work and to get involved, visit the website or get in touch with the company’s founder here.

Tinia Pina is the Founder and CEO of the AgTech company, Re-Nuble. She has appeared in Huffington Post and Venture Beat, and has received numerous awards for her work in sustainability.

2 For the purposes of this article, it’s important to note that the definition of urban areas in America varies greatly from Western counterparts. Specifically, many people living in “urban” areas in the States are in smaller cities that lack a viable public transportation system.