The catastrophic drought in California, one of the richest regions of the world, is a crisis for householders, farmers and industry, but it could prove to be a great spur for water innovation.

“There is a tide in the affairs of men, which taken at the flood, leads on to fortune,” Shakespeare wrote in Julius Caesar, Act IV.

It is drought and not flood which is making the headlines in California at the moment, but the US state’s water woes present an opportunity for water innovation in which fortunes will surely be made.

If the opportunity is not seized, the drought threatens to impact the wellbeing of California’s US$2.2 trillion economy, the largest in the US. California also has the largest water abstraction rates in the US, as shown in Figure 1 (groundwater and surface water) and the breakdown by category of use.

Figure 1: US water abstraction rates and breakdown by category of use. Source: BlueTech Research and US Geological Survey.

Right now there is a perfect storm brewing in California, a heady mix of prolonged drought, political will, available funds, technologies and an openness to embrace change.

Let me outline of a few of these ingredients:

It is often noted that there is a paucity of innovation in the water sector. One of the main reasons for this is lack of necessity, simply put – ‘If it ain’t broke, don’t fix it.’

When you see a governor calling for a mandatory 25% reduction in water use, the state proposing a $7.5B state water bond to fund water resource projects and the state legislature passing bills to manage the state’s long neglected groundwater resources, the seriousness of the situation becomes evident. Figure 2 shows the drought conditions in the US at the time of writing this article. 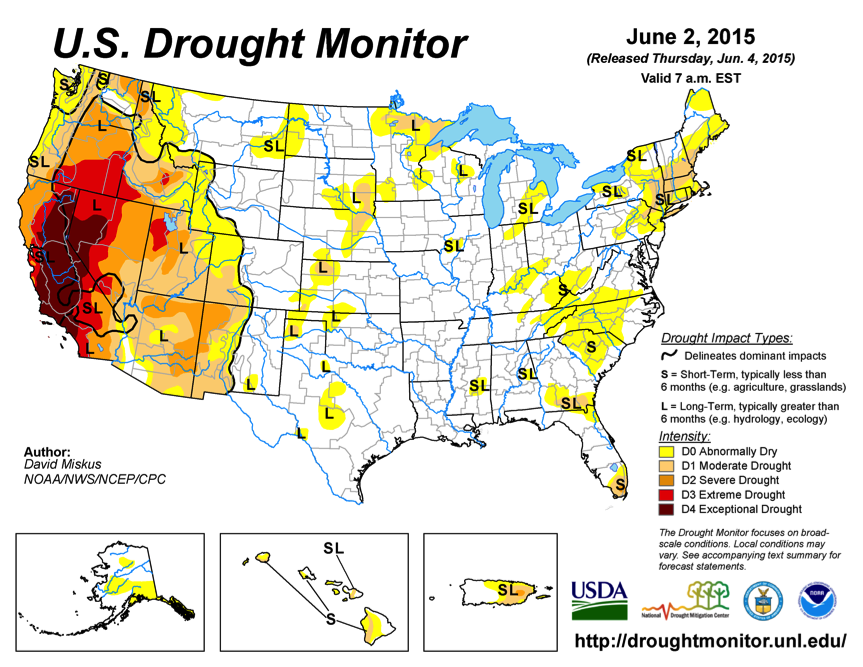 California accounts for 50% of all US-based VC investment by dollar value and 40% by number of deals[1]. 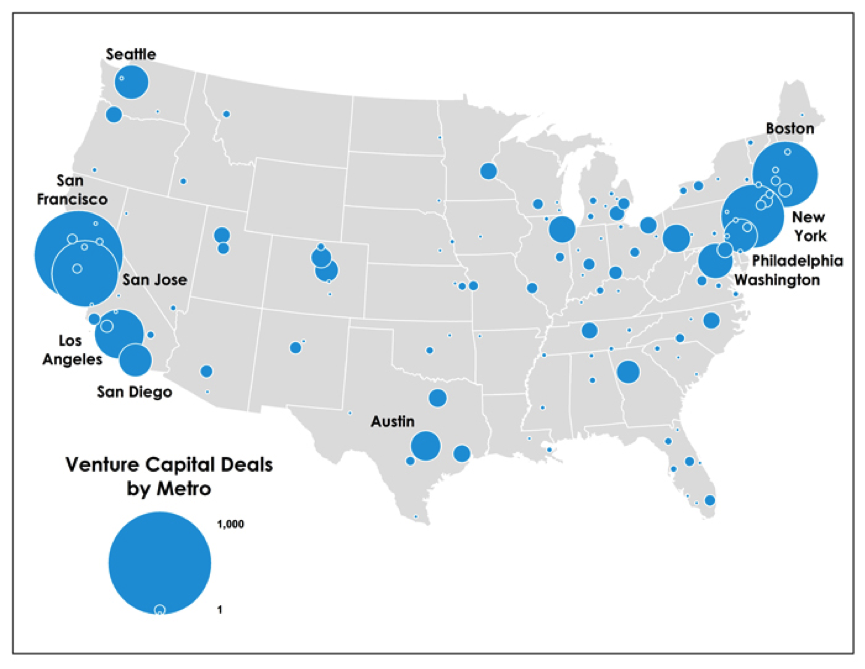 Many of the leading VC funds have dipped their toe in water, so to speak, and the current situation will no doubt whet their appetite further to look for disruptive solutions and innovation to current water challenges. Many of the largest funds, Kleiner Perkins, Draper Fisher Jurvetson, Khosla Ventures, Oak Investment Partners, Silver Lake Kraftwerk have all made investments in water technology plays.

While venture capital investment is an important catalyst for change, the success rate has been chequered at best, and it is by no means essential for solutions to water issues.

We need new thinking as much as new technologies. Our openness to new thinking and change is directly proportional to how palatable the alternatives are. A great example is direct potable water reuse (DPR), this would have been unthinkable six years ago in California, but now the mood has shifted and it seems certain it will be part of the solution.

Also needed in equal measure to investment, are changes to regulations, policies and a willingness on behalf of government to be open to new approaches and business models.

The state of California has passed numerous provisions in the past year that signal increased investment in water infrastructure and advanced treatment technology is imminent. A state water bond passed in 2014 that allocated US$7.5B towards new water projects, with US$1B of the new bond dedicated to water recycling and reuse projects.

The state has set aggressive targets for wastewater reuse, aiming to triple the current level of 8.6 million m3/year (700,000 acre-feet/year) by 2030. The social roadblocks to reuse have all but evaporated, with recent polling that shows Californian’s overwhelming favor water recycling.

This has prompted cities such as San Diego to seriously consider direct potable reuse, with the city funding a pilot DPR project that began operation in September 2014.

The passage of bill that requires all groundwater to be regulated by regional authorities is both long overdue and further proof of the seriousness of the drought. Groundwater has long been a source of contention in California due to the frequent over-drafting by agricultural users, particularly in drought years.

The unsustainable usage of groundwater leads to a reduction in aquifer storage and land subsidence, but the strength of the agricultural lobby had so far prevented action on this issue. In 2014 the state passed a bill requiring all groundwater resources to be managed by a central authority, and while unincorporated regions have 20 years to comply with the mandate, it still represents an important move towards protecting the state’s water resources. 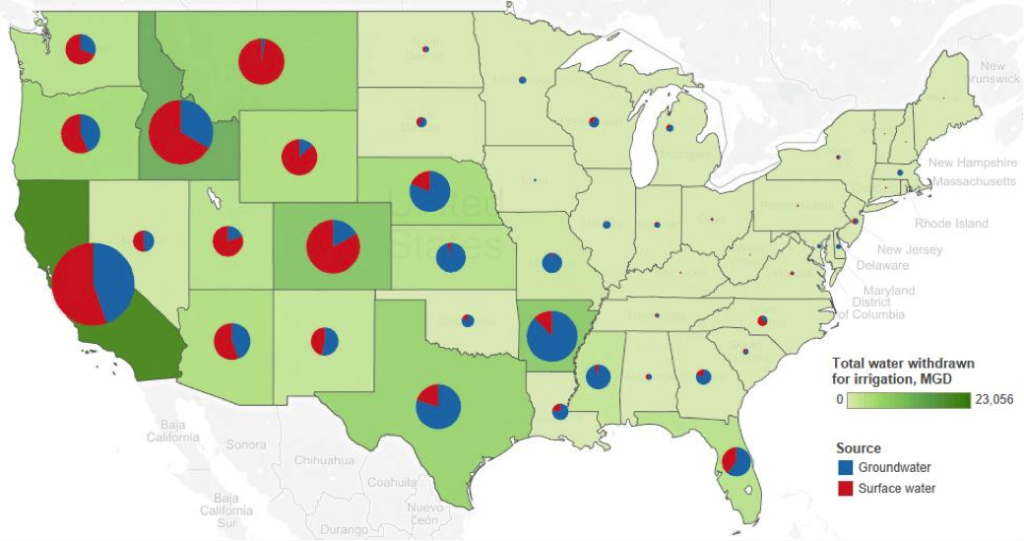 Figure 4: US abstraction rates for irrigation purposes and source breakdown. Source: BlueTech Research and US Department for Agriculture (USDA)

The table in figure 5 shows the BlueTech® Water-to-Value Index© for which the value of agricultural output (farming not including livestock) and the total water abstracted for irrigation in 2012 were compared. This shows that California has the highest ratio of water used to value of economic output of any state in the US, which illustrates the importance, and vulnerability to water resource availability.

Californian universities are home to many of the most prominent thought-leaders in water including, to name a few, George Tchobanoglous at UC Davis; Perry L McCarty and Craig Criddle at Stanford; Slav Hermanowicz at UC Berkley and Erik Hoek at UCLA.

California is well known as being a hub for start-up companies and water is no exception. Some examples from the BlueTech Innovation Tracker include NanoH2O, Porifera, Pasteurization Technology Group and WaterSmart.

It is well accepted, that Californians are wacky, it’s an endearing part of the psyche of a state that was the birthplace of the hippy counter-culture, flower power and Haight Ashbury. Some of that legacy just lives on in the general way in which Californians embrace everything from the latest diet fad to bio-energy healing.

Californians generally embrace new ideas faster than some other areas, and often lead the way in new environmental regulations such as low emission vehicles and embrace new technologies such as solar PV. This is good news for solving water issues, as what is needed in water, is as much new thinking as it new technologies.

A few examples where California has already displayed leadership in relation to water are:

The good news in all of this is that solutions exist and many of these simply require us to re-think the way we view and interact with water. Some silver bullet solutions include direct potable water reuse; the use of halophyte or salt-tolerant plants, which allow food crops to be produced using brackish water; seawater toilet flushing and water avoidance solutions.

Currently California recycles 2.27M m3/day (600 MGD) of reclaimed water, equivalent to the volume produced by 6 million population equivalent. It is estimated, using available data and information, that approximately 8.7M m3/day (2,300 MGD) of water may be available for reclamation and recycling by 2020.

Embracing this source could lead to more than 3.8M m3/day (1,000 MGD) of potable water supplies, water to meet the needs of almost ten million people, about one-quarter of the current population of California. Direct potable water reuse has been put into practice successfully in countries such as Singapore.

Wade Miller of the O2 Technology Assessment Group recently wrote that six years ago a rational conversation on DPR would not have been possible. However, it is less energy intensive than desalination, and avoids transporting water over long distances.

California is being eyed as a prize by water technology companies internationally. If they can be part of the solution in California, this will pave the way for success elsewhere.

To date Californians have seen the water crisis approaching like a slow moving train. It has very much been a case of ‘It’s morning again in America’ – with green lawns to prove it.

California will now have to tackle water scarcity on the home front, which is really where all battles against water scarcity will be played out. Unlike oil, millions of gallons of water cannot be shipped across multiple states and between countries.

Originally published on BlueTech Research and reprinted with permission.