Will Autonomous Cars Help or Hurt the Environment? 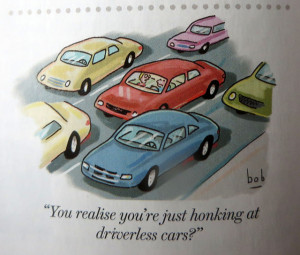 Driverless cars are on their way, whether you like it or not.

Pretty soon, autonomous driving will be a thing of the present, rather than the future, and dozens—if not hundreds—of manufacturers will be offering self-driving vehicles. It’s not a matter of “if,” but rather a matter of “when.”

Yet, it leaves us wondering: will these cars of the future be just as bad for the planet as our current vehicles?

The answer, at least right now, is: It depends.

How Long Until Vehicles Drive Themselves?

The list of automakers currently working on driverless vehicles is long. And it’s not just Google; there’s also Audi, BMW, Ford, General Motors, Honda, Infiniti, Lexus, Mercedes-Benz, Nissan, Tesla, Toyota, Volkswagen, and Volvo. Oh, and lest they be left out, rumors are also widely circulating that Apple may enter the fray as well.

It may be a while until we see wholly autonomous vehicles weaving around open roads, but there are many that already make use of this technology, albeit sparingly, in some form or another. For instance, the 2014 Mercedes-Benz S-Class can be programmed to drive all by itself on the highway. Of course, drivers must keep their hands on the steering wheel—the car decelerates if they don’t—and the vehicle must stay in its lane.

Meanwhile, self-parking support has been around since late 2007, with many different vehicles now able to park successfully, without anyone behind the wheel.

Then there’s Cruise, an autonomous operation kit that can be installed in the Audi A4 and S4 to add self-driving features.

Google and Nissan expect to have autonomous cars on the road sometime by next decade, and some of the other manufacturers working on the technology are hot on their heels, so they won’t be the only ones.

If all goes well, autonomous vehicles will have widespread traction by 2020. But what will this new world look like? We’re still left with a host of unanswered questions. How will they affect the environment? Could they help us reverse climate change—or could they be even worse than the cars we have now?

Let’s take a look at the possibilities—some good, and some potentially complicated.

Most people choose not to commute too far to get to work, and it’s no secret why: driving can be a tedious chore. However, if you’re able to use the commute time for yourself, you might be more inclined to take a longer trip. Imagine reading a newspaper, doing some work, playing games, or even watching a movie—all while your car drives itself. It’s an awesome prospect, sure, but it also means people will be willing to travel farther.

Take, for example, this driverless car concept from Mercedes. If there’s a steering wheel at all, it’s well-hidden and entirely optional for controlling the vehicle. It’s clear that this car was designed for leisure in mind; it has more in common with a recreational boat than with today’s more utilitarian cars. If that won’t encourage more aimless tooling around, I don’t know what will.

When humans are in control of a vehicle—no matter how good we think we are at driving—we’re constantly accelerating and braking. This lowers fuel and energy efficiency. That’s why cruise control works so well when it comes to conserving fuel.

Autonomous cars employ a computer that allow them drive much more efficiently than traditional automobiles. They can maintain speeds longer, accelerate, and brake at just the right moment using advanced algorithms and equations and, ultimately, save time and fuel. Rush hour gridlock may soon be just a distant, unpleasant memory.

This complements the point above about people driving more often or over longer distances; public transportation that’s fully automated could be used much more extensively. Think about it: there’s no need to have a human driver in the vehicle that needs to stop for bathroom breaks, food, or otherwise.

A transport vehicle can be put on a schedule and sent on its way, and it can travel for as long—or as far—as it needs to. That could mean more vehicles on the road, or it could mean less. It could also mean that public transport routes become extended and are relied on more heavily. Only time will tell.

This could be bad for the environment for the same reason that more driving is bad: more emissions and increased fuel consumption.

Interestingly enough, self-driving cars could also encourage less driving. Consider taxis and transport fleets similar to Zipcar and Car2Go in urban areas. People might be more willing to give up their own vehicles and rely on a local fleet to get around. One could make the argument that it would just mean more taxis are on the road, but that might be moot thanks to the operating efficiency of driverless cars.

Autonomous vehicles have lower operating costs per mile (thanks to better fuel efficiency), reduced wear and tear on all components—including brake pads and the engine—and improved time management. Better yet, if the vehicles can communicate with one another it will reduce the number of empty vehicles driving around and should improve travel time. Moreover, businesses everywhere could take advantage of economic savings in the ballpark of a cumulative $109.7 billion—and that’s based on just a 20% adoption rate of autonomous vehicles.

In the end, it does seem like the potential benefits of autonomous vehicles far outweigh the risks, especially when you consider how many lives could be saved. Human error is to blame for 90% of accidents on the road, after all, which means that with every traditional car we replace with an autonomous one, our collective safely is slowly but surely improved.

But at the end of the day, the environment may end up being the biggest beneficiary of this kind of technology. But whichever way you look at it, there are exciting things on the horizon.

Step one? Removing human error from the equation.

[About the author: Daniel Faris studied creative writing and journalism at Susquehanna University in central Pennsylvania, and now writes for a global audience. In his spare time he covers politics, technology, and progressive music. Image: Gwydion M. Williams]