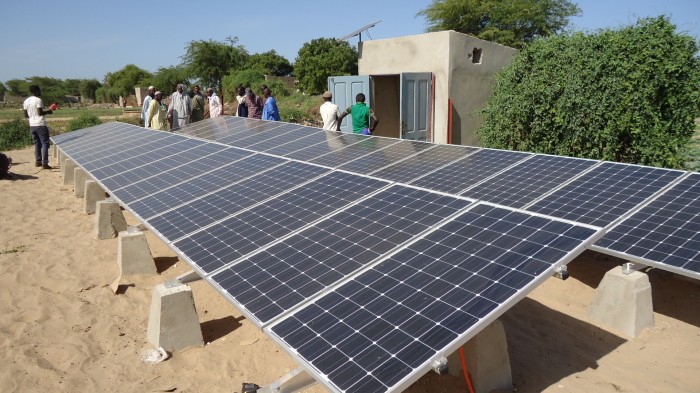 In rural areas of Senegal, getting water for irrigating crops often comes with a hefty price tag, not only in terms of the cost to buy the fuel for it (about $1 per day for an average gas-powered irrigation pump), and the time necessary to procure it from the nearest gas station (which could be an hour away by car), but also in regards to the polluting emissions of the pumps themselves, which are not clean-burning or very efficient. Because of these barriers, quite a bit of watering is done by hand, which can often take all day to do and limit each farmer’s crop production.

Putting in solar powered irrigation pumps might be one possible solution, but most small farmers, such as those in Senegal’s Niayes zone, where over half of the nation’s agricultural products are grown, can’t afford a gasoline pump, much less a standalone solar pump, so solar irrigation hasn’t yet been a viable option there. But thanks to the work of Columbia University’s Sustainable Engineering Lab (SEL), a different model of providing solar irrigation may prove out to be the most sustainable solution for small farmers.

The Smart Solar Irrigation project is based on building a centralized solar plant, where a single PV array and monitoring and control system provides the power to the individual pumps of its customers, who pay only for what they use with a prepaid credit program. To keep the costs affordable, the system developed by SEL is a battery-less one (a battery bank not only adds to the initial cost, but also requires future costs for replacement) that only pumps when the sun is shining.

Here’s how it works:

Pre-paid credit: Electricity is sold by a micro-utility to farmers using a pre-paid credit system similar to cell phone scratch card systems, only paying for what they consume.

SEL just finished installing the first of three of these pilot solar irrigation systems, each of which will provide solar electricity to pump water for 7 farmers in rural Senegal, as part of a USAID Powering Agriculture grant. The first system, a 6.8kW solar array, was installed in Gabar, Senegal, with the central controller located in a small concrete building nearby, where it will serve as a micro-utility supplying electricity to local farmers.

More about the smart solar irrigation system from SEL can be found at the website.