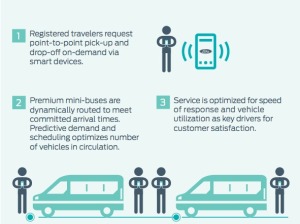 When a large established company makes an earnest effort to reinvent its relevance to the market, by focusing on its strengths and responding to the changing needs of their customer base, interesting things can happen.

Big automakers such as Ford, arguably the most well-known car brand in the history of the US, beginning from the all-American success story of its founder’s assembly lines, are now redefining their focus to include a stronger emphasis on technology and personal mobility, and with this changing focus, are coming up with solutions more in line with collaborative consumption and the sharing economy than what you might expect from a company that sells cars.

One case in point is Ford’s model for a ride sharing program, which is a smartphone-enabled, on demand, point-to-point car service, called the Dynamic Social Shuttle, and which is currently being explored as a possible transportation solution (and potential franchise opportunity).

Tina Casey, over at Cleantechnica, explains why Ford is optimistic about ride sharing:

Here’s Why Ford Is All Over Ride Sharing

When an auto manufacturer recasts itself as a personal mobility services company, it can find itself on some risky turf. Ford, for example, has a couple of ride sharing experiments under way, and some people are wondering if they haven’t gone bonkers — after all, why would an auto manufacturer encourage more people to buy fewer cars?

On the other hand, the auto market of the future is going to be huge, with the Earth’s population projected to double from 7 billion to 14 billion [update: or around 9.6 billion]* by 2050. That means there are plenty of sub-markets ripe for the picking, and Ford has good reason to expect that in the urban market, future mobility customers are going to be primed and ready to share.

We’re already familiar with the sharing concept through companies like Uber, but we’re beginning to see the downside of a model that rests on a foundation of exploitable franchisees. Ford is coming from a different angle, and we’re guessing part of that has to do with its experience in shuttling people around its main campus in Dearborn, Michigan.

Why Ford Is Optimistic About Ride Sharing

The Ford ride sharing model that we’re particularly interested in is called the Dynamic Social Shuttle. A smartphone enabled, point-to-point, on-demand premium ride service, the Social Shuttle is part of the company’s Smart Mobility experiments announced last week. When we first took a look at it we thought it was a nifty idea, but we were wondering what kind of futurecasting was encouraging Ford to look in that direction.

That’s because in order for the Social Shuttle to work as intended (and be profitable for the vendor), it depends on passengers communicating and collaborating on routes and scheduling.

Ford’s presentations at the Auto Show yesterday made a pretty good case for that happening.

According to Ford’s take, for previous generations getting your first car was a rite of passage, the key to freedom and adulthood. Today’s up-and-coming generation is more disconnected from that experience, therefore more likely to share.

We’ll add our own take to that. If anything, your first smartphone is going to be the biggest deal in your life up to that time, and unblocked Internet access (and an unlimited text plan) is your rite of passage into social freedom. You’d much sooner share a ride than your smartphone, right?

We’re not a huge fan of generation labels but let’s note for the record that this is all about “Generation Z.” That would be the 2 billion people under age 21 today, many of whom are not even in their late teens yet, but soon they will be and they will be buying — or at least using — cars.

Ford reads Generation Z as “independent, impatient, entrepreneurial, extremely environmentally aware, and more likely to want to have an impact on the world.” They also send and receive an average of 110 texts daily, and they are immersed in social media, online learning, and online collaboration.

Ford showcased three entrepreneurs who reinforced the company’s sense that collaborative mobility will continue to trend upwards. Emily White, founder and COO of SnapChat, made the case for a new generation of collaborative-savvy consumers in the “Our Stories” format that the company has developed.

The co-founder and CEO of DigiTour Media, Meredith Valiando-Rojas, similarly described a constituency of young people who recognize that forming collaborative, supportive online communities can lead to shared experiences in real life.

Smartwatch developer and beekeeper (yes, the two are related) Davis Barrow emphasized how the preteen generation is growing up in a connected environment that is socially enriched by technology rather than isolated by it (not for nothing but we never believed in that isolation thing, either — after all, it’s just as easy to isolate yourself without technology).

Why Ford Is Really Optimistic About Ride Sharing

Before we get to the Dearborn campus, let’s also consider Ford’s own experience with collaboration. Inter-company collaboration is nothing new, for example look how long the standard USB connection has been around. Now ratchet that up a notch or to and you get crowdsourcing, open sourcing, and all kinds of other collaboration on technology and software emerging at the global inter-corporate level.

Ford is part of that trend and at the auto show, the company described how it open-sourced its AppLink platform to foster the development of an industry standard (for those of you keeping score at home that’s the GENIVI Alliance Smart Device Link or SDL).

That brings us to the Dearborn campus shuttle. Just a few months ago, Ford announced that it was dropping its Ford E-350 vans in favor of its Transit vans and Transit Connect Wagons.

The basic ides is to save money on fuel by tailoring the size of the van more closely to the number of riders, and it also indicates why Ford is interested in a Social Shuttle model that accommodates a limited number of passengers per trip rather than using larger vans or buses: the Dearborn shuttle makes numerous runs with only one or two passengers.

On the other hand, in 2014 alone the Dearborn shuttle fleet racked up approximately 500,000 miles, which indicates the potential for enormous demand in other contexts.

It’s also worth noting that the smaller vehicles are much more easily maneuverable in an urban environment, and Ford is looking specifically at megacities as a growing market for its new mobility products.

In case you missed the obvious, yes it’s nothing new for an auto manufacturer to foster ride sharing by manufacturing passenger vans and buses (mass transit, much?). What’s new is the degree to which Ford is directly involved in shaping a new model for urban ride sharing.