Doing Well by Doing Good: The Case for Corporate Sustainability

The movement toward starting greener, more sustainable, businesses isn’t new, because ecopreneurs have been making waves in the sustainable business world long before the word sustainable was used to describe them, but taking an existing business, especially a big one, and transforming it a company that values and supports environmental stewardship is something of a rarity.

However, it can be done, as Ray Anderson demonstrated with his company, Interface, the world’s largest maker of carpet tile, which has made huge strides toward corporate sustainability, and served to inspire many others in the business world to make the case for sustainability in their own companies. A recently released feature documentary, So Right So Smart, features Ray Anderson, as well as a host of other green business leaders and top executives, sharing their stories of sustainability leadership and success in their own companies. Sandy Dechert, of Planetsave, has the story: 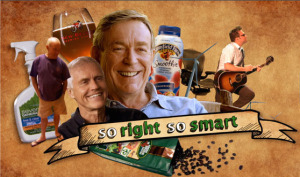 It wasn’t until recently that American business started discovering that what’s good for the planet is also good for the bottom line. In fact, the link between green and profit is still pretty hidden, especially from consumers. It shouldn’t be: thus the national television rollout of So Right So Smart.

The award-winning feature revolves around the true story of entrepreneur Ray Anderson, owner of Interface, the world’s largest designer and maker of carpet tile. Anderson started the company and achieved success, but something was missing. After a “Eureka!” moment when he saw the link between successful business and a healthy planet, he began transforming his enterprise into an environmentally sustainable international corporation.

Surprising many, the profits grew and grew. Anderson had succeeded in marrying industry and ecology. The Washington Post called him “the Greenest CEO in America.” He called himself a “radical industrialist.”

The basic tale of Anderson’s astonishing conversion comes to us straight from the man, before his untimely death from cancer. I watched with interest as this very relaxed, likable guy narrated the tale of his epiphany with geniality and smarts. Interviewed by The New York Times, Ray—it’s so tempting to use his first name—talked about the massive differences his ethical approach has made:

“I always make the business case for sustainability. It’s so compelling. Our costs are down, not up. Our products are the best they have ever been….  And the goodwill in the marketplace—it’s just been astonishing.”

His successor, Dan Hendrix, wholeheartedly agrees. They have greened Interface with methods as common-sensical as coordinating delivery schedules in the same city, rather than just shipping orders out at random. They’ve also put in place wide-reaching and esoteric methods like recycling nylon fishing nets, which would otherwise disrupt the marine ecosystem. Interface has reduced yarn scrap by 54% and curtailed PVC use in its operations. Mission Zero completion date is 2020.

Bracketing the greenest CEO’s billion-dollar success story are interviews with top executives of other large corporations who have come to similar conclusions. You may be surprised to see some of the names featured in the film—Yvon Chouinard of Patagonia, Gary Hirshberg of Stonyfield Farm, Doug McMillon of Walmart, and Paul Murray of Herman Miller. Executives of Green Mountain Coffee, Seventh Generation, and the New Belgium Brewery appear as well.

All these companies have demonstrated environmental stewardship that has fostered product gains. Walmart, the world’s largest company by revenue, may come as the greatest surprise here, but despite other issues, the company has shown leadership by implementing sustainability in all its US locations (retail stores, handling and warehouse facilities, even the company headquarters). Expenses have dropped as a result.

I was glad to see that along with testimony from top execs, So Right So Smart presents current professional thinking about the state of the environment and our paths toward sustainability. Amory Lovins, Paul Hawken, John Picard, David Suzuki, Janine Benyus, and Jonathan Lash share with us the many benefits of ecology-minded commerce. Says professor Paul Connett, “If you make the time frame long enough and you make the space long enough, there is no difference between ecology and economics. They are the same subject. You just need to look at it from the perspective of the whole planet.” Says Rocky Mountain Institute’s Lovins, “There is no waste in nature. Everybody’s waste is somebody else’s food.”

The filmmakers punctuate their story with some easy animations that explain the sustainable science and economics behind business success. Blade Runner film celeb and activist Daryl Hannah weaves the stories together. The picture has screened at world festivals (list here) and has also played in theaters.

So Right So Smart comes from a dedicated team headed by cinematographer Justin Maine (Super Knocked Up). The production work was primarily conducted by a 3-person MagicWig crew. Maine says “A photo or moving image tells the kind of stories I want to tell. For me it all happens in the viewfinder…. Our film is the result of some amazing collaborations of many talented people!” As the greenest CEO, Ray Anderson, put it, So Right So Smart satisfies “a lot of hunger out there for a message of hope.”

The documentary about pioneering green business practices is now coming to American homes via multiple PBS broadcasts. It’s on this weekend in Chicago, Wheeling, and Anchorage. You can check out the schedule for your hometown here.

So Right So Smart (@sorightsosmart, #sorightsosmart) struck me as a genuinely upbeat, engaging feature: no lectures, a rounded perspective, and satisfaction for everyone at the end.