While some cleantech entrepreneurs are looking to further develop solar power, wind power, and marine power to meet some of our future energy needs, others are looking much closer to home with their own renewable energy projects, including in an unlikely spot – the organic wastes produced by communities every single day.

The move to a cleaner, more renewable energy future isn’t going to come through a single technology, but rather through a number of different approaches, including increased energy conservation and efficiency (which can reduce our overall energy demands), as well as developing new methods for creating conventional liquid fuels for our existing equipment, using renewable feedstocks.

A biofuel project being developed by Vitruvian Energy could be one possible path to reduced fossil fuel dependence, as well as smaller carbon footprints for existing engines used for transportation or electricity production. 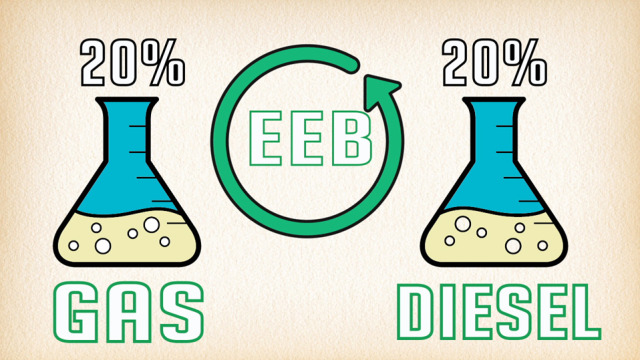 Theirs is essentially a waste-to-energy project, which converts sewage treatment biosolids and other organic waste materials through a fermentation and chemical process into ethyl-3-ethoxybutyrate (EEB). EEB can be blended at rates up to 20% in gas and diesel engines without requiring any modification to the engine, or could be used as is in some cases as a fuel source for generating electricity.

Because Vitruvian’s biofuel process starts with biosolids (the waste material from processing municipal sewage and wastewater), agricultural byproducts (such as rice straw, corn stover, or grains from a distiller), and animal wastes from ranches and dairies, all of which have to be hauled away anyway, often with a cost attached, it could help to solve two issues at the same time – waste and energy.

The EEB process was initially developed with the assistance of a few grants (California Energy Commission and National Science Foundation), and a test vehicle using the fuel has been in use at Oak Ridge Laboratory, but in order to scale up their efforts, Vitruvian wants to build a prototype production facility for EEB. And for that, they’ve turned to Indiegogo for crowdfunding.

One of the appeals to this waste-to-energy biofuel is that it may allow for more local energy production, and using the community’s waste as a feedstock for a cleaner fuel alternative could be one piece of the future energy puzzle, which looks increasingly like a more distributed and localized one.

One of the downsides of this approach to biofuel is its reliance on ethanol, which has its own set of issues when it comes to being sustainable and cost-effective. However, according to Zack McMurry, one of the developers of EEB, “Our technology creates ~2 kilograms of EEB for every 1 kilogram of ethanol that goes into our biofuel, because most of the ethanol used in our process is not consumed, but is instead reused for the next batch of EEB.”

Find out more at Vitruvian Energy.