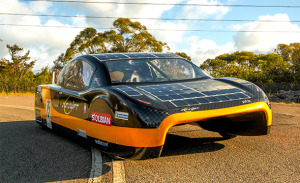 With everyone and their brother planning their own crowdfunding campaigns, in the hopes of raising enough cash to fund the further development or production run of their big idea, the crowdfunding environment is getting more and more crowded every day.

Between wishful thinking, downright silly projects that get funded (or not), it’s easy to feel skeptical about this funding option, but as the crowdfunding industry begins to mature, we’re starting to some great reasons for using crowdfunding to bring a product to the market, such as that of this solar car campaign.

A team of undergraduate students, having already built a record-breaking solar car, the Sunswift eVe, now want to take that concept car from something used only for solar car racing and development and turn it into a road legal solar car (and eventually to a mass-produced version), have launched a crowdfunding campaign to help with those costs. The money raised by the campaign is slated to be used for underwriting some of the costs of meeting safety regulations and testing, which are necessary for this electric car to eventually be on the road.

Chris Demorro has the scoop at Gas2:

There aren’t many electric cars that can rival the range of the Tesla Model S, but the Sunswift eVe solar car can. Using a lightweight body and super-efficient solar panels, the student-built Sunswift can travel over 300 miles at highway speeds without plugging in. Now the team behind this long-range solar car is turning to crowdfunding to make their car road legal.

Having officially set a world record for the fastest solar car to travel over 500 km on a single charge, the 60 undergraduate students that helped put the Sunswift eVe on the road want to raise approximately $30,000. That money will allow the team to go through the necessary processes with the Australian motor vehicle department to make their concept car road legal, the first step towards their ultimate goal of achieving mass production. The $30,000 is about one-third of the money they need to complete the testing, and they hope to source the rest from industry partners and sponsors.

Let’s be real here, the chances of us being able to buy a practical, solar-powered car anytime soon are pretty low. On the other hand, major automakers like Mercedes seem to think solar panels covering parts of passenger cars is a likelihood (just not anytime soon), and in places like Australia where solar power is booming, maybe the Sunswift eVe stands a chance of becoming more than just a cool concept.

After all, not many people believed Tesla Motors would ever become much more than a niche automaker, but it seems to be all anybody can talk about these days.

Could this unlikely team of Australian engineering students be the next Tesla? With your help, they just might be, so if you’re feeling generous head on over to their Pozible site to kick in a few bucks towards this ambitious solar-powered automobile.