How to Keep Multitasking From Ruining Your Productivity

The myth of trying to increase your productivity by being busier and trying to cram more into your day can actually end up backfiring on you. Whether it’s by burning you out quicker because of trying to do so much, or through causing chaos in your life or business due to having too many commitments, or even just incidentally, because of too many little tasks that you take on personally, which can end up falling through the cracks and never get done, multitasking is a double-edged sword. On the one hand, combining related tasks can make some things simpler and easier, and on the other hand, splitting your attention all the time means you’re only partially present at each task.

Multitasking has its time and its place in productivity, and there are definitely times when you can do two things at once and they both get done well (eating a meal while catching up on your reading, for example), but all too often, this tendency to multitask can hurt your productivity. Sometimes both (or several) tasks end up taking more time and effort than is necessary, and the end products aren’t worth the time saved. Focusing on one thing at a time can not only aid in the “getting things done” department, but can also go a long way toward cultivating some peace of mind, by providing a clear distinction between different tasks (which may require different skills).

Liz Thompson, over at our sister site Feelgood Style, offers some great insight into the dangers of multitasking (and how to stop doing it):

All that multitasking that you do. That we all do. Is it ruining your life? Or at least your productivity? 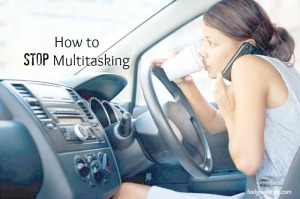 A super busy lifestyle is a large part of our culture. Almost like it’s a contest to see who can wear themselves the thinnest. I once read (sorry, can’t remember where right now) that a high tolerance to stress is actually a bad thing. That this means you can handle a lot of stress because you are subject to a lot of stress.

While we’ve taken to holding ourselves to high stress standards, this is not actually a good thing. Sure, we all have to deal with stressors from time to time. Such is life. But to willingly put yourself in a position to endure stress on a very regular basis is not healthy. And when we take a step back and look at it objectively, seems pretty darn crazy.

By stress I’m talking the day to day business that keeps us running from task to task, often piling one task (or more) on top of another. Multitasking became a hot term, and we were all expected to jump on board. The more-is-more idea took hold and our current lifestyle is the result.

But more recent studies show this way of living is not only detrimental to our well being, but isn’t really helping us to get more done. That our brains work less effectively when we are tackling several things at once.

Think of this way. Each time you switch from one task to another (and that is what you are doing while multitasking) there is a lag time where you shift gears. The human mind is not set up to seamlessly go from doing one thing to another without an adjustment period. This adjustment period can also be thought of as wasted time. If you simply stick with one task until it is finished or for a set period of time before moving on to something else, you will work more proficiently. Time better spent. It feels better too.

How to Stop Multitasking, Already

Put it down and back away. I know, I get sick of device-bashing too. Smart phones and tablets have definitely improved our lives and it’s ok to love them. Still, don’t you start to feel overwhelmed during times of obsessive phone checking? You know the feeling. Take a day (or a few hours) off of social media to purge. Feels good. Give it a try.

Set time to check email. Electronic communication is a wonderful thing. Especially in this era of remote working. But nothing can send your productivity into a tail spin quite like checking your email. Just one quick peek to see if that reply I’ve been waiting on has come in. Yeah, 20 minutes later you are coming up for air. Try keeping email checks to once per hour or until you’ve finished the task at hand.

Mindful tasking. Did you know even the most mundane jobs can be a form of meditation? By focusing on what you are doing, without letting your mind run crazy with distraction, you become more centered and peaceful. It may sound crazy, but give it a try while washing dishes or folding laundry. What do you have to lose? Or just try doing, well, nothing.

Truly listen. How often do you ask family member or co workers to repeat themselves? We are all guilty of this. No, it’s not hearing loss. More like, not paying attention. By not concentrating on the moment we are missing out. And it has been said by some pretty smart people that living in the moment is where it’s at.

Let’s turn multitasking into mindful tasking. What do you say?