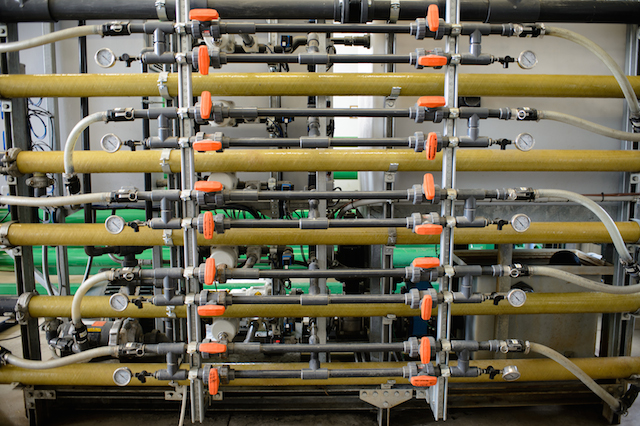 By combining an anaerobic digester with a filtration and reverse osmosis system, an idea that began to be developed at Michigan State University (MSU) matured into a system that can turn cow manure into clean water, while also capturing essential nutrients that can be reused as fertilizer.

One big environmental issue with animal production, such as dairy or beef operations, is dealing with the huge amounts of manure that are produced every day, which is somewhere in the neighborhood of 50 to 100 pounds per day, per cow. Managing all of that manure is a science in itself, and keeping it from contaminating local water supplies with pathogens, as well as releasing large amounts of ammonia into the atmosphere, is important for the long-term viability of these types of agricultural operations.

“If you have 1,000 cows on your operation, they produce about 10 million gallons of manure a year. About 90 percent of the manure is water but it contains large amounts of nutrients, carbon and pathogens that can have an environmental impact if not properly managed.” – Steve Safferman, MSU associate professor of biosystems and agricultural engineering

The new development, which has been about 10 years in the making, is called the McLanahan Nutrient Separation System, and is said to be able to produce 50 gallons of clean water from 100 gallons of manure, which can then be used to water the livestock. In addition to being able to reclaim clean water from cow manure, the system also extracts nutrients that would otherwise be lost, producing not only fertilizer, but also keeping pathogens and high levels of nutrients (which can contaminate water and affect air quality) from being released into the local environment.

While this technology could be an important addition to operations in arid regions, where water is at a premium, it may also be a key component of dairy or beef operations in other regions, by helping with nutrient recycling and mitigating the environmental effects on local water supplies and air quality.

According to MSU, it’s hoped that the technology can be commercialized by the end of the year.