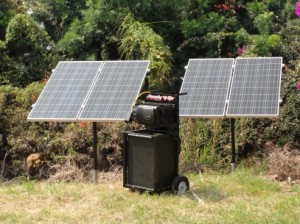 To replace the dirty and expensive diesel generators often used to power the tools and equipment in his contracting business, a Hawaiian contractor built a portable solar generator to provide clean, quiet power on the jobsite, and his solar-on-wheels system is not just a functional tool, but is a great introduction to solar energy for his fellow contractors.

Tony Vidana, a contractor on the Big Island of Hawaii, originally designed and built his Ready2Go portable solar generator for his own use, and has built a number of homes and structures entirely with the solar power from it. However, on top of being a great way to generate affordable and clean power for his tools and equipment, Vidana has also found that it also created an excellent opportunity to demonstrate that solar power isn’t nearly as complex as some people believe, and that it can serve as “solar on training wheels” to convince other tradesmen that are skeptical about solar power.

The Ready2Go portable solar generator system has 2.6 kWh of AGM battery storage, a high efficiency Outback brand inverter (which converts the DC from the battery bank to AC for standard electrical devices), and four 135W solar panels. The system is built to be ready to go as a plug-n-play power option for just about any offgrid use. According to Vidana, a full charge can provide enough power for a crew of 4 carpenters for up to 4 days, and could be useful for not just contractors, but as a home backup power source, or for outdoor events and emergency preparedness.

“Ready2Go is clean, quiet, mobile, reduces trips to the gas pump, and is environmentally friendly. They can be used for back up power stored in anyone’s garage or outbuilding. Ready2Go HO can be used outdoors in inclement weather. It is also extremely helpful as emergency backup power in disaster prone areas where grid power can be unreliable or fuel for generators is difficult to acquire.” – Ready2Go

Get more information about this portable solar generator from Ready2Go.