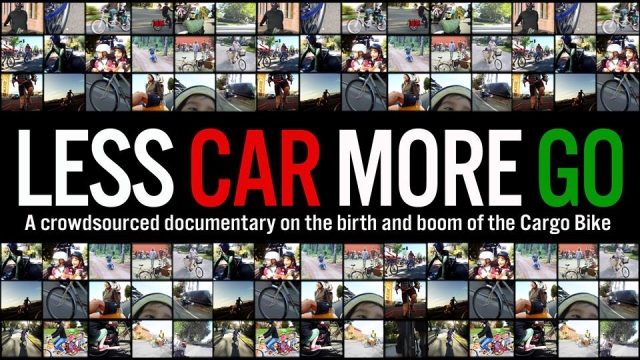 In the green blogosphere, we’re rather bullish on cleantech and renewable energy, and it’s no secret we’re in favor of electric cars and hybrids, but let’s face it, we’re not all going to be able to run out and put money down on big ticket items to live a more sustainable life.

Even if we were to replace every vehicle on the road with an electric one, and install a solar PV array to generate the electricity for each one, we’ll still end up with crowded streets and high transportation energy consumption, because our car culture almost demands that we each drive our own car (and because our neighborhoods and cities are built on a scale that caters to cars, driving seems to be required).

So to my way of thinking, the vehicle that could potentially have the most impact on personal transportation is not necessarily an electric car or a hybrid, but the humble bicycle.

For a single person, a standard road or mountain bike, with a rack and panniers or a small trailer, is a great low-impact vehicle for both daily commuting and for running errands. For the family, and the person who regularly needs to haul more than a small load with them, a cargo bike is the way to go, as they can make it much easier to haul both people and goods.

Cargo bikes have been getting a lot of attention in the US lately (though they’ve already been popular in some other countries for much longer), and their owners are not only passionate about them, but evidently they’re rather vocal about them as well. A forthcoming cargo bike documentary stitches together the stories of 100 cargo bikers into a crowdsourced film that “will revolutionize ideas of what a bicycle can do and how a documentary is made.”

“By interweaving Co-Directors’ footage with interviews Liz has shot with riders, designers, shop owners, advocates and pioneers, LESS CAR MORE GO will tell the tale of the cargo bike, from the original bakfiets and rickshaws in Europe and Asia, to the birth of the Longtail in Australia and Nicaragua, through the year 2014 when sales are doubling and tripling annually, and the global cargo bike culture is exploding!” – Less Car More Go

This crowdsourced cargo bike documentary, dubbed Less Car More Go, is also seeking favor from the crowd in other ways, as the filmmaker, Liz Canning, is hoping to crowdfund its production in order to bring this testament to the power of bicycles, community, and art to the world.

The Kickstarter campaign is looking to raise the $40,000 in production costs by May 10th, and is offering backers a variety of perks, such as access to an early digital release of the film at the $25 level.