Honeybees Could Get a Boost from Open Source Printable Smart Beehives

If you’ve been paying attention to the disturbing news about the current state of honeybees, which we rely on for pollinating a large percentage of our food crops, you know that colony collapse disorder has been wiping out beehives across the country and around the world.

Even more disturbing is the fact that we don’t know why it’s happening, or how to stop it from happening, and with beekeepers losing an average of 30% of their hives, it’s quite possibly one of the most pressing issues we currently face in the food and agriculture sector.

But a new initiative aims to help by releasing the designs for new “smart” beehives that can be printed (or more precisely, cut from wood with CNC machinery) and used by citizen scientist beekeepers to contribute to the search for the cause of colony collapse disorder.

The Open Source Beehives project has developed two ‘biodynamic’ beehives that are believed to provide a low-stress environment which can help honeybees thrive.

Each of these hives, the Colorado Top Bar and the Barcelona Warré, can be cut from a single 4’x8′ sheet of wood, and the parts flat-pack for shipping or storage, and then slot together “like an Ikea kit”. The hives are said to be some of “the most easily assembled and transportable beehives” available, and aim to make beekeeping more accessible, while prioritizing the health of honeybees.

These opensource beehives are also designed to be “smart”, by working in conjunction with a sensor board, which links to an online open database called the Smart Citizen platform. These sensors will track the geolocation, air quality, light intensity, humidity, temperature, honeybee population numbers, and “even the colony’s mood” for each beehive, and the resulting data will be available online, and can be accessed from a computer or smartphone in order to study the health of honeybees and the issues affecting them. 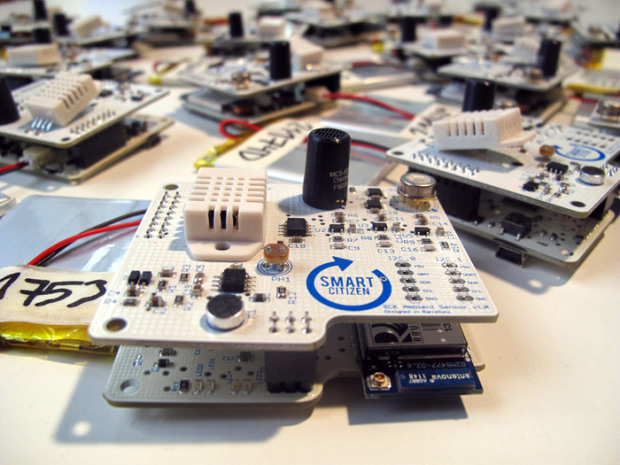 “The Open Source Beehives project is a collaborative response to the threat faced by bee populations in industrialised nations around the world. The project proposes to design hives that can support bee colonies in a sustainable way, to monitor and track the health and behaviour of a colony as it develops. Each hive contains an open source sensory kit, The Smart Citizen Kit (SCK), which can transmit to an open data platform: Smartcitizen.me

These sensor enhanced hive designs are open and freely available online, the data collected from each hive is published together with geolocations allowing for a further comparison and analysis of the hives.” – Open Source Beehives

To get these opensource smart beehives into the hands of more citizen scientists and beekeepers, a crowdfunding campaign has been launched on Indiegogo, where the initiative aims to raise $20,000 from backers. Those who pledge at least $15 to the campaign will receive the design files and manual for building their own smart hive, and those who chip in at least $300 will receive a pre-cut kit, ready to assemble at home.