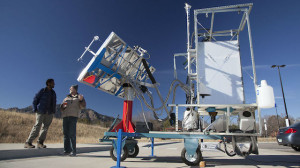 A new type of solar-powered, waterless toilet that creates biochar from human waste could be a game-changing sanitation solution, providing a self-contained safe and sanitary toilet facility and producing a valuable agricultural resource.

Those of us living in the developed world don’t often realize how good we’ve got it, and how many everyday items we take for granted, such as a sanitary toilet and running water, are not available for many people around the globe. For instance, some 2.5 billion people do not have safe or sustainable sanitation, which is something that, for most of us, is just another room in our house, and nothing to get excited about.

But a new kind of toilet aims to help solve that sanitation issue, while also addressing several other pressing environmental concerns, which are decreasing the amount of greenhouse gases in the atmosphere, and boosting crop yields in areas with depleted soils and poor water-holding quality.

This novel toilet, developed at the University of Colorado Boulder, uses the power of the sun to heat the human waste to temperatures high enough to sterilize it and turn it into biochar, removing the risk of pathogens and disease transmission from feces or urine.

The solar-thermal toilet has eight parabolic mirrors to focus and concentrate the sun’s rays onto a small area, which then transmits the generated heat with bundles of fiber-optic cables to the reaction chamber, where temperatures can reach over 600° Fahrenheit.

“Tests have shown that each of the eight fiber-optic cables can produce between 80 and 90 watts of energy, meaning the whole system can deliver up to 700 watts of energy into the reaction chamber, said Linden. In late December, tests at CU-Boulder showed the solar energy directed into the reaction chamber could easily boil water and effectively carbonize solid waste.”

The efforts of the CU Boulder team are funded in part by the Gates Foundation’s “Reinvent the Toilet Challenge,” which seeks to create and develop a “next-generation” toilet that can sterilize the liquid and solid waste from the toilet, while also producing a useful product from the waste. The current prototype developed at CU Boulder is designed to handle the wastes of a single family (4 to 6 people), but the team is working on a larger version that could be used by multiple households and still cost less than five cents per day per user (a target set by the Gates Foundation).

The biochar produced by the solar thermal toilet, which can also be burned as charcoal if desired, can be added to soil to increase its water retention ability by up to 50%, while also increasing the availability of nutrients to the plants growing in that soil, potentially increasing crop yields and contributing to more sustainable agricultural practices.

“Biochar is a valuable material. It has good water holding capacity and it can be used in agricultural areas to hold in nutrients and bring more stability to the soils.” – Karl Linden, CU-Boulder Professor

There are 15 other teams from around the world working on a more sustainable toilet solution, all of them funded by the Gates Foundation, and the teams have recently shipped their creations to Delhi to be unveiled for engineers, scientists, and dignitaries to view and inspect on March 22nd.