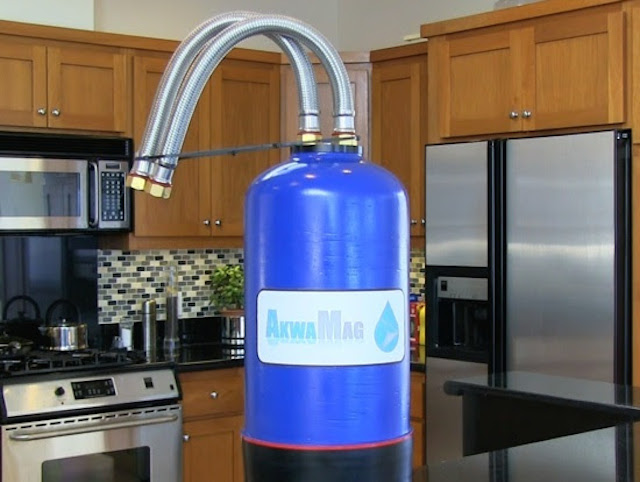 For those of us who live in areas with hard water, dealing with the effects of mineral deposits in our bathrooms, kitchens, and water heaters can be not only a total pain in the you-know-what, but can also be an expensive endeavor. Conventional water softeners tend to require regular maintenance and rely on replenishing the salt, which can end up polluting the local water system.

However, a new type of water softening process, which uses magnets instead of a salt resin and is considered maintenance-free, could end up being the most affordable and effective solution for homeowners in hard water areas.

The Akwamag system uses a “High Intensity Multipass” magnetic technology to treat hard water, by converting dissolved minerals into a crystalline structure that isn’t prone to “scaling” plumbing fixtures and which can be easily removed. The process is said to be able to soften an “unlimited capacity” of water and to not require any maintenance, resulting in an eco-friendly and cost-effective water softening solution.

Not only does the average salt-resin water softening system introduce a lot of salt to the local water system (up to 800 pounds of salt each year), but it also uses about 10,000 gallons of water per year, plus an estimated 10 to 25% more water in order to fully rinse clothes, bodies, dishes, etc., so having a more sustainable water softener could have a bigger impact than just reducing scale in home plumbing systems.

According to the company, the device can handle large volumes of water (continuous use), and the design overcomes inefficiencies found in other magnet-based water softening systems.

Unlike existing water softeners, Akwamag’s patent-pending High Intensity Multipass™ technology can process unlimited water capacity at a fraction of the cost. And because Akwamag is not salt based, homeowners no longer have to worry about purchasing salt every month, or dealing with water waste and salt discharge.”

To get the Akwamag technology to the market, the company has turned to crowdfunding, and their Indiegogo campaign seeks to raise $26,000, with the first units being available to the campaign’s backers as early as July of 2014.