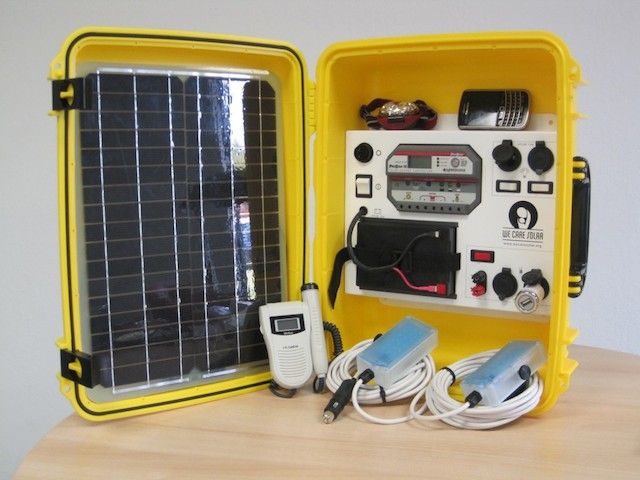 Here in the developed world, we take modern healthcare and all of the technology that supports it for granted, including the most basic of services, such as power and light.

But in the developing world, mothers and newborns can die during childbirth for lack of those simple services, even with the most skilled midwives or doctors attending them. In some areas, midwives have to resort to using candles, kerosene lanterns, or even the light from their cellphones, in order to illuminate the birthing room or medical clinic, which is far from optimal when dealing with issues of life and death.

Thanks to the work of Dr. Laura Stachel and her husband Hal Aronson, there’s a simple and effective solution to reducing maternal and infant mortality in childbirth, and it all fits inside a suitcase that can go wherever it’s needed.

“Dr. Laura Stachel went to Northern Nigeria in 2008 to study ways to lower maternal mortality in state hositals. She witnessed deplorable conditions in state facilities including sporadic electricity that impaired maternity and surgical care. Without a reliable source of electricity, nighttime deliveries were attended in near darkness, cesarean sections were cancelled or conducted by flashlight, and critically ill patients waited hours or days for life-saving procedures. The outcomes were often tragic.” – WE CARE Solar

Stachel and Aronson co-founded a nonprofit, WE CARE Solar, in order to improve maternal and infant health outcomes in areas of the world without access to reliable electricity, and took on the challenge of developing a viable solution.

Stachel’s husband, a solar energy educator, built a prototype of a portable solar electric system designed specifically for maternity wards, labor rooms, operating rooms, and labs. This portable solar power system fit into a suitcase-sized enclosure, and when Stachel brought it with her to a Nigerian hospital, to be used to charge LED lights, headlamps, and walkie-talkies, the healthcare workers immediately saw the importance of having such a system, especially in outlying medical clinics.

From that prototype grew the current iteration of their portable solar electric system, which fits into a rugged suitcase, and is dubbed the Solar Suitcase. Since then, WE CARE Solar has produced about 300 of the Solar Suitcases and distributed them to 25 countries in order to help reduce maternal and infant mortality there. And while the purpose was initially to support healthy outcomes in childbirth, the Solar Suitcase easily lends itself to the other needs of medical clinics, as it can provide highly efficient lighting, as well as power for mobile communication, laptops and other small medical devices.

“The system includes high-efficiency LED medical task lighting, a universal cell phone charger, a battery charger for AAA or AA batteries, and outlets for 12V DC devices. The basic system comes with 40 or 80 watts of solar panels, and a 14 amp-hour sealed lead-acid battery. The maternity kit comes with a fetal doppler.” – WE CARE Solar

For her work in introducing this life-saving system to clinics in developing countries, and thereby reducing maternal and infant mortality, Dr. Stachel was named one of the Top 10 CNN Heroes for 2013.

“I really want a world where women can deliver safely and with dignity, and women don’t have to fear an event that we consider a joy in this country. To see birth associated with death and fear is an outrage. Before I went to Africa, I knew women were dying at high rates. I just didn’t know they were run-of-the-mill things we can take care of.” – Stachel

WE CARE Solar is a 501(c)(3) charitable organization, and needs donations to fund their current projects, which include supplying Solar Suitcases in the Philippines, Nepal, and Tanzania. Each Solar Suitcase (with accessories) costs $1,500, a fetal Doppler device costs an additional $100, and shipment to Africa or Asia costs about $200, so if you want to support this important health initiative that reduces maternal and infant mortality in developing countries, please consider making a donation.