This Cryptocurrency is Backed by Solar Energy 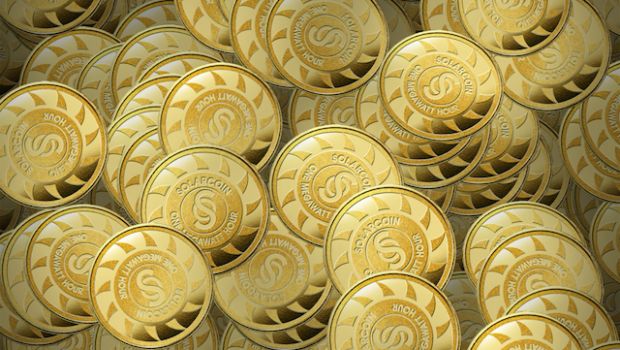 Cryptocurrency, sometimes referred to as digital currency or alternative currency, has been making waves in the news lately, mostly due to the rapid rise in value of Bitcoin. But there are other cryptocurrencies out there that are less well-known, including one new digital currency that is backed by the generation of solar electricity.

It seems appropriate that a new method of earning, spending, and trading value or assets, such as cryptocurrency enables, can be tied to a relatively new method of generating energy. And that’s the idea behind SolarCoin, an alternative currency backed by solar electricity production, which is designed to incentivize the production of 97,500 TWh of global solar generation over the next 40 years.

The other proof of work is a Solar Renewable Energy Certificate (SREC) that has been generated and 3rd party verified. SolarCoin is equitably distributed using both of these proofs of work as a means to reward renewable energy production.”

Each SolarCoin represents the generation of 1MWh of solar electricity, and the cryptocurrency can be used to pay for goods or services from individuals and businesses that accept it. SolarCoin, which is managed by the Open Currency Association (OCA) can be “earned” by solar power producers, can be mined (such as other cryptocurrencies are), or bought through an alternative currency exchange.

The basis for this crypocurrency is a 2011 paper co-authored by Nick Gogerty, of Thoughtful Capital Group, titled “DeKo: An Electricity-Backed Currency Proposal“:

In addition to being an incentive for wider adoption of solar electricity generation, SolarCoin is also said to be a lower-carbon cryptocurrency, as according to their Wiki, “SolarCoin is believed to be 50 times more energy efficient than Bitcoin by its design rapid mining reward decay rate.”

According to CoinDesk, there are some drawbacks to this digital currency:

“One of them is that, whereas most altcoins are designed to be independent of geography or government, the OCA’s paperwork may have to be retooled for different countries. They all have different regulatory and incentive frameworks which would affect how the coin works, and the OCA – which doesn’t even have a charter yet – will need to work with each of them independently to get the coin up and running.”

Get more info on this new cryptocurrency at SolarCoin, check out the Wiki, their GitHub page, or join the SolarCoin Facebook Group.