A Sustainable Clothing Crowdfunding Campaign that Pays it Forward 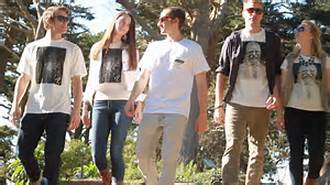 It’s no secret that we love eco and social enterprises that use crowdfunding to get off the ground, as using crowdfunding to raise money can offer some great advantages to entrepreneurs, including pre-selling, instant feedback on products, and “no strings attached” funding (other than fulfilling the perks). Crowdfunding also offers entrepreneurs a low-cost method of marketing, especially to a self-selected audience that cares about the type of products that are being created (as opposed to trying to market to anyone and everyone with “spray and pray” tactics.

But in and of itself, crowdfunding isn’t exactly a magic bullet for raising money, or any greener or more responsible than other forms of launching a business, so I was pleasantly surprised to see a new disruptive twist on the concept: paying it forward to other sustainable crowdfunding campaigns.

Teddy Rose is an eco-friendly clothing company that’s producing bamboo fiber shirts, which are a more sustainable clothing option than those offered by most other apparel lines, and they’ve added a philanthropic capitalism angle to their crowdfunding campaign on Indiegogo, dubbed the “green snowball effect.”

The company takes its name from one of the early leaders of the American conservation movement, former President Theodore Roosevelt, who played a pivotal role in the creation of a number of national parks, national monuments, and National Forests, which we still enjoy to this day.

“Teddy brought an aggressive, brave, and tireless energy to conservation efforts. He lived life to the fullest, but understood that we humans should be conscious of how our actions are a part of Earth’s past, present, and future.”

Teddy Rose’s choice of bamboo for their sustainable clothing line is in line with that conservation ethic, as it’s a low-impact and renewable source of fiber.

In Chinese culture, bamboo is a symbol of friendship, vitality, and strength. We like to imbue those virtues in our shirts which are made from bamboo viscose.

Here are some more reasons we love bamboo as a raw material:

The company’s choice to pay it forward to other sustainable crowdfunding campaigns is part of something they call “eco-entrepreneurial empowerment capitalism,” and shows their desire to lead by example in sustainable business. Teddy Rose has pledged to give funds to three other crowdfunding campaigns that are aligned with the principles of sustainability, and will also feature those same campaigns on their website after their Indiegogo campaign is finished.

Find out more about Teddy Rose at their website, and consider kicking in to their sustainable clothing project at Indiegogo.