Fast, efficient, and affordable 3D printer could be a gamechanger 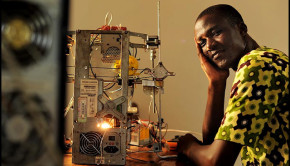 When a group of college students couldn’t get access to an affordable 3D printer at their schools, they didn’t let that get in their way, but instead built their own, and the resulting version ended up being faster, more efficient, and a fraction of the cost of other 3D printing options.

The 3D printing device developed by Shai Schechter, Andrey Kovalev, Yasick Nemenov, and Eugene Sokolov, dubbed Deltaprintr, could be a major gamechanger in prototyping and quick fabrication, and based the success of its current Kickstarter campaign, is well on its way to blockbuster status with makers of all stripes.

We engineered the Deltaprintr to be simple, efficient, and affordable. We want as many people as possible to be able to get their hands on this exciting new technology without having to sacrifice quality or user-friendliness.

Simple – Using a 3D Printer shouldn’t be a hassle. We designed our printer so that it requires minimal set-up, and so that there’s effectively no long-term maintenance. We’ll be shipping every printer with a construction manual (pictures!) to get you up and running in no time.

Efficient – The polar coordinate system allows for faster movements (than those of traditional Cartesians printers) while achieving a 100 micron resolution.

Affordable – Because a Deltaprintr design doesn’t need as many parts as other 3D printers, we can pass the savings on to you.

According to Deltaprintr, aside from being much more affordable than alternatives ($685 fully assembled, vs about $2000 for a new MakerBot 3D printer), it has a number of other benefits:

The Deltaprintr frame is expandable to accommodate larger jobs, uses 65lb Spectra fishing line instead expensive belts (which can occasionally skip while printing), and is not only made of fewer parts than other 3D printers, but those parts are also more universally available, making it easy to customize.

If you’d like to be one of the first to own one of these affordable 3D printers, check out the Kickstarter campaign page, or get more information at Deltaprintr.