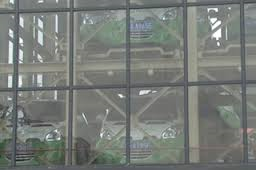 What would it take to put more drivers behind the wheel of electric cars, in order to reduce pollution and dependence on oil? Perhaps by taking a hint from what’s happening right now in Hangzhou, China.

With less than 1% of American households currently owning or driving an electric vehicle, there’s a huge opportunity for growth in the electric car industry, in terms of selling vehicles and the charging infrastructure necessary to support them all.

And with stories of the horrible air pollution in China in the news everyday, you might think that’s the last place to get inspiration for cleaner transportation option, but like most solutions, the best ones come from those who live and breathe the problem (literally).

China is one of the leaders in adopting electric bikes, scooters, and cars, and it’s about to get a whole lot easier to drive and electric vehicle there, thanks to an innovative solution from Kandi Technologies.

“The Kandi public EV CarShare concept is based on Hangzhou’s bikeshare, the largest bikeshare in the world and the first of its kind in China. The bikeshare has since spread from Hangzhou to 19 Chinese cities including Shanghai and Beijing.

Kandi’s plan is to build with both Government and “outside” support, 750 of these garages in just the City of Hangzhou over the next four years through a 50-50 joint venture with Geely Automotive, China’s largest passenger automaker, which would require some 100,000 Kandi electric vehicles to stock them. This model is slated to spread to other cities and regions like Shanghai, Shandong, and Hainan. Two garages were just completed in Hangzhou over the past two months and another 18 are currently under construction as of two weeks ago.” – Aaron Rockett

Xiaoming Hu, the Chairman and CEO of Kandi, put forth an audacious proposal last year, titled “Exploration of a New Business Model for Electric Vehicles and the Public Transportation Project of 100,000 Rental EVs in Five Years in Hangzhou City,” which is currently under consideration by Chinese government officials.