An Urban Micro-Farm in a Mobile Box 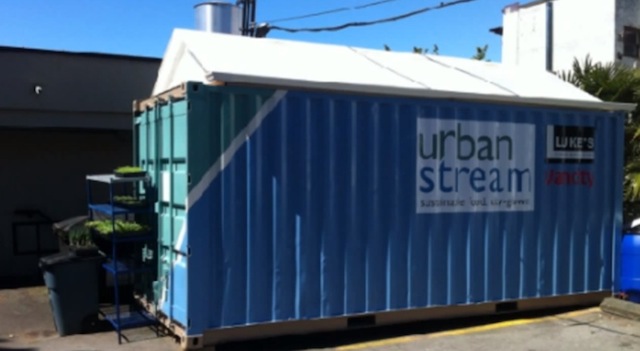 Do you want to help change the nature of food production for urban consumers and reduce your community’s carbon footprint at the same time? One way to that goal is by producing more local and sustainable food, even in the heart of the city.

One promising solution bypasses the need for a plot of land by building a mobile micro-farm in a box, using vermicomposting and a heat and nutrient recovery system to grow food in an aquaponics setup inside a shipping container.

“Our technology consists of a close-coupled composting and aquaponic system, capable of producing fresh, sustainable food.

The composting system is combined with a vermiculture unit to make up the Urban Stream Heat and Nutrient Recovery(TM) (HNR) bioreactor, which is capable of recovering both energy and nutrients. This bioreactor controls the reaction process and directs the reactor outputs to keep balance with the aquaponic system. The aquaponic system is capable of growing a wide range of products at 40% less cost when compared with stand alone “aquaponic” systems.” – Urban Stream

The system utilizes high-temperature compost, in combination with worm composting, to feed both the plants and the fish growing in the unit. The first of the zero-mile, urban micro-farm solutions from Urban Stream is in place at Luke’s Corner Bar & Kitchen, in South Granville, Vancouver, and now the company is looking to build another micro-farm to grow mushrooms, greens, and fish. To that end, they’ve launched an Indiegogo campaign to crowdfund the next ‘farm in a box’.

According to the campaign page, each one of these micro-farms is capable of not only growing hundreds of pounds of herbs, baby greens, and mushrooms each year, but also can remove up to 15 tonnes of organic waste from the waste stream through their composting process.

Find out more about these mobile micro-farms at Urban Stream or at the Indiegogo campaign page.