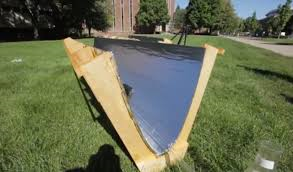 For close to a billion people in our world, access to clean, safe, drinking water isn’t easy or simple. There are plenty of systems for purifying water, but many of them rely on costly technology or other inputs (chemicals or power), so coming up with an effective and low-cost water disinfection method could make a huge difference in the lives of people living in water poverty.

“Millions of people in developing countries do not have readily available water, or they become sick because of the water they drink. People in these countries may not have the infrastructure or financial resources to clean the water, deliver it and keep it clean until it’s used. Common problems include microbial pathogens, which are largely associated with human and animal waste.” – Ernest “Chip” R. Blatchley III, professor of civil engineering and environmental and ecological engineering at Purdue University

A prototype of a low-cost water disinfection system from researchers at Purdue may be a big step in the right direction, as it uses the inherent power of UV radiation from the sun to deliver safe drinking water, even in large quantities.

“The shape of the reflective mirror concentrates the sun’s UV rays so the radiation inside the pipe is more intense than outside. The radiation damages the DNA in microorganisms. When this is done, the microbes can no longer grow and the water is safe. We are using the range of solar UV wavelengths that are most effective for damaging microorganisms’ DNA. Using material that is transparent to these wavelengths of radiation allows us to disinfect water a lot faster. We can pump water continuously through the system and produce water in a larger quantity.” – Blatchley

The new system, which pumps water continuously through a UV-transparent pipe placed on a parabolic reflector, has proved its worth on a small scale, with the prototype delivering clean water at a rate about 10 to 20 milliliters per minute. The next step for the researchers is to investigate how to scale up the system for larger quantities of water so that it is a feasible clean water solution for families and villages.