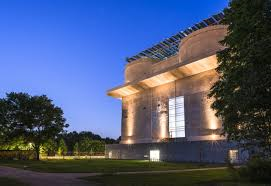 A bunker built in Hamburg, Germany, in 1943 as an air raid shelter, and then gutted four years later by a controlled demolition by the British Army, has been refitted as an “Energy Bunker” and a symbol for a cleaner and more renewable energy future.

The original bunker has been serving as a war memorial for the last 60 years, with only its outer shell of 3 meter thick walls and high ceiling remaining. But the bunker’s rebirth as an eco-friendly part of the area’s energy systems is now a great showcase for renewable energy technology.

“After more than 60 years of lying vacant, and following a project development and construction phase of seven years, this war memorial now symbolizes our journey into a climate-friendly future. This Energy Bunker does not only generate clean energy for the surrounding residential quarter, it also demonstrates how local resources can be utilized for producing and storing heat.” – Uli Hellweg, managing director of International Building Exhibition

Energy supplied to the nearby neighborhoods comes from a combination of solar, biogas, wood chips, and waste heat, and the Energy Bunker serves as a large-scale buffer storage facility for extending the capacity of local energy efforts. The building features solar panels on the roof that feed into Hamburg’s electrical grid, and integrates a regenerative power plant and large-scale heat reservoir, with the aim of generating and supplying 22,500 megawatt hours of heat and 3,000 megawatt hours of electricity to area residents.

The Energy Bunker is part of a “CO2-neutral district” project called Renewable Wilhelmsburg, which has set a goal of meeting 100% of the district’s energy needs in a climate neutral way by 2025, and all of the heating needs by 2050. The objective is to transform the entire district (encompassing 50,000 residents) into a climate neutral locale by 2050, and to ultimately supply all of Hamburg’s river islands with CO2 neutral energy.

The building, at Neuhöfer Straße 7, is open to visitors and has a viewing platform, a permanent exhibition and a café.

Find out more about other innovative ideas about shaping the future of urban life at IBA Hamburg.