Thin-Film Solar Cells That Are Easy To Manufacture Hit 15.4% Efficiency

An easy-to-manufacture, thin-film solar cell with a higher than 15% conversion efficiency was recently created by researchers at the University of Oxford through the use of a newly emerging type of semiconductor referred to as “perovskites.” The new devices are simple enough that they could be mass produced rather easily, by utilizing processes such as vapour-deposition — potentially greatly cutting down on costs, according to the researchers.

The “perovskite” semiconductors — organometal trihalide perovskite semiconductors, which have the formula (CH3NH3)PbX3, with X being iodine, bromine, or chlorine — are relatively new to the solar energy field, having been first employed in solar cells only back in 2009. And while those first attempts to utilize them were relatively impressive, those initial results have now been surpassed, thanks to a simpler, new device that possesses a solar-to-electric power efficiency of 15.4% and a large ‘open circuit’ voltage of 1.07 V. 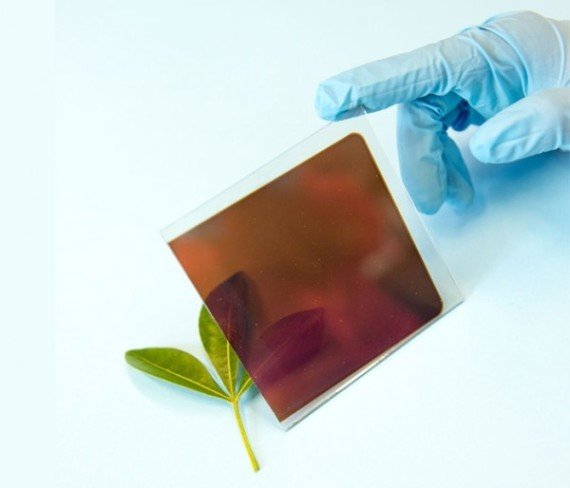 “Our devices have a high solar-to-electric power efficiency of 15.4% and a large ‘open circuit’ voltage of 1.07 V – all in a solar cell in which the absorbing perovskite layer is only 330 nm thick,” states lead research Michael Johnston. “This means that we only need a tiny amount of perovskite material to make a solar cell with good properties.” (Conventional crystalline silicon cells, by comparison, are much thicker — usually ~0.15 mm — and produce less voltage — ~0.7 V under open-circuit conditions.)

“Little is known about the photophysics of these materials, which I think is quite exciting – this is a rapidly evolving field,” Johnston continues. “The fact that we can make such good solar cells using a conventional planar p–i–n architecture indicates that the charge-carrier diffusion lengths (the distances electrons and holes travel before recombining) are long, and that these carriers survive a long time in perovskite. That we can fabricate an efficient device without complex mesostructuring – as was previously the case with solar cells made from this material – also shows that perovskite is very good at both absorbing light and transporting photogenerated charge.”

According to the researchers, these perovskite-based devices should be cheap to make using processes that are compatible with existing solar-cell manufacturing infrastructures. And since they absorb light in a different part of the electromagnetic spectrum to silicon, the two materials might be used together in so-called tandem cells in which a silicon device would be placed underneath a perovskite one.

The researchers are now working to optimize the technology. Johnston explains: “I think we will see the efficiencies of these devices climbing higher in the near future. Investigations into the fundamental photophysics of the perovskite layers will be particularly interesting and will also help us accelerate the optimization process.”

The new research was published in the journal Nature.