Researchers in Taiwan have come up with an interesting way to make use of the incredible quantities of compact discs which are thrown away every year — use them to break down sewage and clean wastewater. The research team behind the new idea will be presenting their wastewater treatment device (which utilizes CDs) at the Optical Society’s (OSA) Annual Meeting, Frontiers in Optics 2013, October 6-10 in Orlando, Florida.

“Optical disks are cheap, readily available, and very commonly used,” states researcher Din Ping Tsai, a physicist at National Taiwan University. “Close to 20 billion disks are already manufactured annually, so using old disks for water treatment might even be a way to cut down on waste.”

The researchers — composed of team members from the National Taiwan University, the National Applied Research Laboratories in Taiwan, and the Research Center for Applied Sciences in Taiwan — make use of the large surface area of the discs as a framework on which to grow tiny, upright zinc oxide nano-rods that are about a thousandth the width of a human hair. These zinc oxide nano-rods then work to break apart organic pollutants like those in sewage when illuminated with UV light — zinc oxide is an inexpensive semiconductor that can function as a photocatalyst. 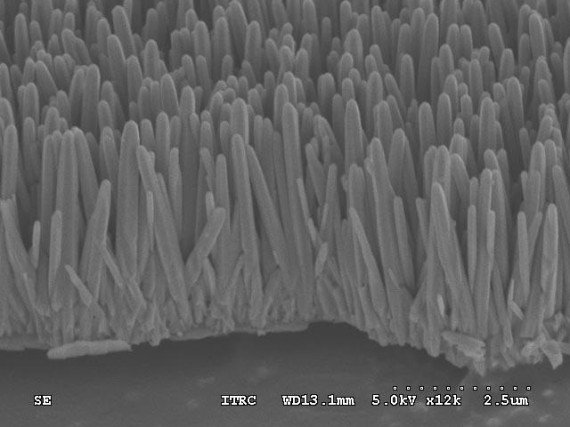 The press release from the Optical Society provides details:

While other researchers have experimented with using zinc oxide to degrade organic pollutants, Tsai’s team is the first to grow the photocatalyst on an optical disk. Because the disks are durable and able to spin quickly, contaminated water that drips onto the device spreads out in a thin film that light can easily pass through, speeding up the degradation process.

The Taiwanese team’s complete wastewater treatment device is approximately one cubic foot in volume. In addition to the zinc oxide-coated optical disk, the device consists of a UV light source and a system that recirculates the water to further break down the pollutants.

The research team tested the reactor with a solution of methyl orange dye, a model organic compound often used to evaluate the speed of photocatalytic reactions. After treating a half-liter solution of dye for 60 minutes, they found that over 95% of the contaminants had been broken down. The device can treat 150 mL of waste water per minute, the researchers say.

While there are some obvious advantages to this approach to wastewater treatment, the most important one is that the reactor is very energy efficient and processes contaminated water more quickly than other photocatalytic wastewater treatment methods, according to Tsai.

The researchers think that their device would be best utilized on a relatively small scale, such as in the treatment of domestic sewage, urban run-off, farm waste, and industrial sewage. The researchers are currently working to improve the efficiency of the reactor.