Google’s 2012 carbon footprint was recently revealed by the tech giant as part of its annual report on the subject — for the sixth year in a row, Google has been effectively carbon neutral. Of course, that’s not to say that it isn’t the cause of quite a lot of actual carbon emissions, simply that it has offset its emissions through the purchase of high-quality carbon offset credits.

The company does seem to be making notable progress with regard to reducing its actual carbon emissions, though — for the fourth year in a row, the company is emitting less carbon per million dollars of revenue, according to its report. These reductions in “true emissions” have been primarily a result of the company sourcing more and more of its electricity from renewable energy sources, rather than conventional power sources such as coal; as well as improvements in operational efficiency. 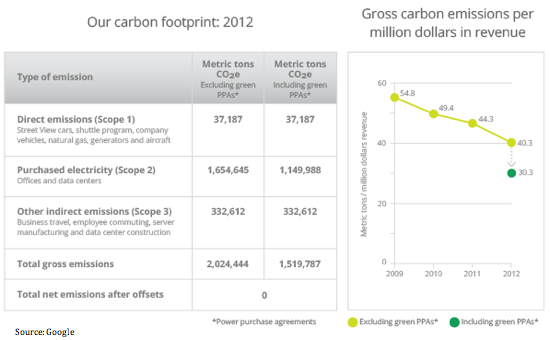 Google has been carbon neutral for six years. This means that all of the work we do has a total carbon footprint of zero. This includes serving 100 billion search queries and 6 billion hours of YouTube videos a month, supporting 750 million Chrome users and delivering Google Maps in 194 countries.

In 2012 we emitted 1.5 million metric tons of carbon dioxide, before purchasing high-quality carbon offsets to reduce that footprint to zero. Our total carbon emissions decreased 9% compared to the previous year because we’re now deducting our green power purchases from our carbon footprint. We’re deducting these purchases according to new reporting guidance from the Carbon Disclosure Project. We continue to buy large amounts of renewable energy for our operations; to date we’ve contracted for over 330 MW of wind power in the US and Europe. For transparency’s sake, we’re also reporting our footprint without those purchases. We urge others to do the same, which is why we participate in the World Resources Institute Scope 2 accounting process. This helps to ensure greenhouse gas reporting remains transparent and meaningful.

For some perspective (on both Google’s energy use and your own) — by Google’s estimate, serving an active Google user for one month equates to roughly the same amount of carbon emissions as driving a car for one mile. According to Google, the average user is someone who performs about 25 searches a day, watches around an hour of YouTube videos a day, uses a Gmail account, and occasionally utilizes the company’s other services. Not too bad. Imagine if you were driving to the movies, mailing letters, driving to the library, and such instead.