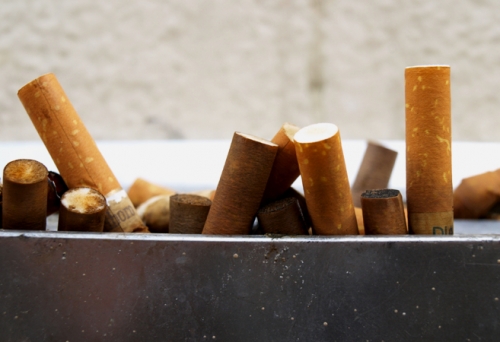 So, is it any surprise that cigarette butts would also cause a lot of mayhem? As a matter of fact, according to CigaretteLitter.org, it is estimated that well over several trillion cigarette butts are littered around the world on an annual basis. It is so much of a problem that reportedly, cigarette butts are actually the most littered item in the United States.

When you think about the things that can do harm to our physical health, cigarettes would have to be on the top of the list. According to the Center for Disease Control, the adverse effects of smoking counts for nearly one in five deaths, is the cause of 90 percent of lung cancer deaths in men and 80 percent cause of lung cancer deaths in women and for smokers, it also significantly increases the chances of being diagnosed with heart disease and stroke as opposed to those who do not smoke.

Aside from the fact that it is a remnant of a habit that is so potentially destructive to human beings, being that cigarettes are made of cellulose acetate tow (a substance that is not biodegradable), it can take several decades for butts to actually degrade; therefore, making them just that much more of a threat to the environment.

So, with cigarette butts making up approximately 38 percent of the trash that is found on America’s roadways, it is great news that TerraCycle has made the commitment to do its part to recycle some of the cigarettes that are littering our communities.

If you are not familiar with TerraCycle, it is a company that focuses on creating systems that will upcycle items that are considered to be hard to recycle (such as cigarette butts). With the hopes of being able to keep cigarette butts off of the sides of highways and out of landfills, TerraCycle has recently partnered up with Santa Fe Natural Tobacco Co. in the hopes of being able to create some viable alternatives for cigarette waste.

The current vision is that the tobacco company will sponsor what is known as the Cigarette Waste Brigade, a program started by TerraCycle that encourages people and organizations to actually collect the cigarette waste in their homes, neighborhoods and communities; except, rather than simply disposing of it, they can notify
TerraCycle, receive a prepaid shipping label and then mail the waste to the organization. With that cigarette waste, TerraCycle will assist in turning it into things like shipping pallets and ash trays, plastic lumber and railroad ties.

TerraCycle is excited about this effort because being able to recycle cigarette butts is something that they have wanted to do for some time now. They believe that this plan will make a large impact on cleaning up the earth and with the early media support that they are getting, it would appear that many would agree.

So, whether you’re an avid non-smoker, you’re someone who smokes on a daily basis or you’re more of a casual smoker who does things like purchase expensive cigars and cigarettes at online smoke shops, the next time that you see a cigarette butt in your yard or you are tempted to leave one behind on the ground, contact TerraCycle instead. Cigarettes are a bad habit for our health and for our lands. We’ve got to do our part to cut it out and pick it up.