Last updated on by Nicholas Brown

Tesla Motors today introduced its supercharger network of electric car chargers in Norway. Norway has one of the highest electric car ownership rates (relative to its population size) in the world. Constructing charging stations there would help thee early adopters and make prospective electric vehicle buyers more confident that they will be able to recharge whenever necessary.

Many of us consider this is critical to the adoption of electric vehicles. Tesla Motors has been promising to place its Supercharger networks within the range of all Tesla Model S vehicles so that they will not have to worry about running out of charge, and thanks to Tesla’s special technology, these Superchargers live up to their name and charge quite fast. 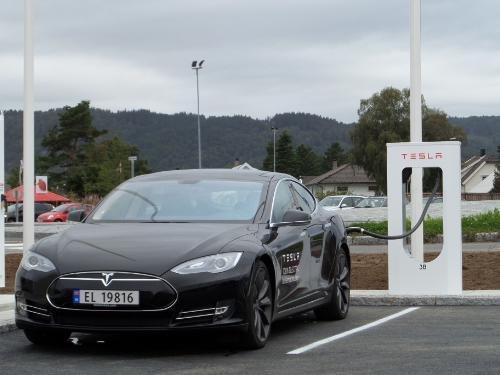 Another thing worth noting is that, the faster a person charges, the more cars can charge per day, and the less likely it is that people will have to wait for someone else to finish charging.

Superchargers have been installed in Lyngdal, Aurland, Dombås, Gol, Cinderella and Lillehammer. Norway is mostly covered by Superchargers now.

According to the news source, PR Newswire, Model S customers can drive routes such as the E6 from Trondheim to Oslo, the E18 from Oslo to Kristiansand, the E39 from Kristiansand to Stavanger, and Highway7 from Oslo to Gol for free and with minimal stops. Approximately 90% of the Norwegian population lives within 320 km of a Supercharger station, and about 60% of the country’s total land mass is within the same distance of a station.

The fact that the Superchargers are free is of course a great perk. This gives Tesla Model S owners a great deal of assurance: Relatively fast charging, anywhere in the country, and its free.

Attempting to cover an entire country with charging stations may be very costly, but it could be worth it. As Shai Agassi noted in a series of posts in the past two weeks, the company that leads the way in a new, disruptive market gets rewarded handsomely (look at Apple, Google, Ford, etc.).

This means that in the US and Norway, the Tesla Model S is the most practical electric car (where range and the ability to recharge is concerned). Tesla has done something that no other manufacturer has done: build the cars and the infrastructure to support them!