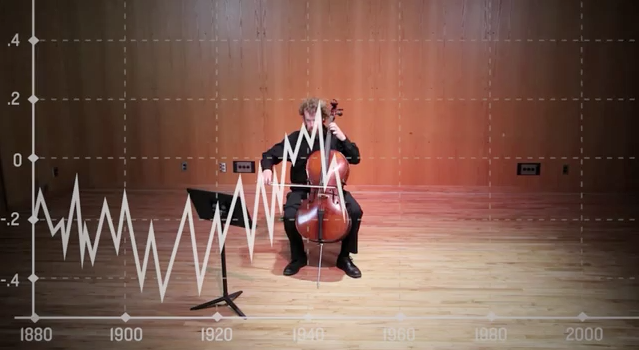 One drawback of climate research and warnings on rising temperatures is that it is hard to understand all that complex data.  Scientists often rely on data graphics and technical descriptions to share their understanding of climate science. How can the risks and reality of climate change be communicated in a way that is accurate as well as easy to grasp?

University of Minnesota undergrad Daniel Crawford came up with a completely different approach. He’s using his cello to communicate the latest climate science through music.

Thermometer measurements show the average global temperature has risen about 1.4 °F (0.8 °C) since 1880. Typically, this warming is illustrated visually with line plots or maps showing year-by-year changes in annual temperatures. As an alternative, Crawford used an approach called data sonification to convert global temperature records into a series of musical notes.

The final result, “A Song of Our Warming Planet,” came about following a conversation Crawford had with geography professor Scott St. George during an internship. St. George asked Crawford about the possibility of turning a set of data into music.

“Data visualizations are effective for some people, but they aren’t the best way to reach everyone,” says St. George. “Instead of giving people something to look at, Dan’s performance gives them something they can feel.”

Crawford based his composition on surface temperature data from NASA’s Goddard Institute of Space Studies. The temperature data were mapped over a range of three octaves, with the coldest year on record (–0.47 °C in 1909) set to the lowest note on the cello (open C). Each ascending halftone is equal to roughly 0.03°C of planetary warming.

In Crawford’s composition, each note represents a year, ordered from 1880 to 2012. The pitch reflects the average temperature of the planet relative to the 1951–80 base line. Low notes represent relatively cool years, while high notes signify relatively warm ones.

The result – Listen for your yourself as the cello follows a tune that mimics the warming of our planet.  As the sequence approaches the present, the cello reaches higher and higher notes, reflecting the string of warm years in the 1990s and 2000s.

Crawford hopes other researchers and artists will use or adapt his composition to support science outreach, and has released the score and sound files under a Creative Commons license.

“Climate scientists have a standard toolbox to communicate their data,” says Crawford. “We’re trying to add another tool to that toolbox, another way to communicate these ideas to people who might get more out of music than maps, graphs and numbers.”

So as the planet warms further (scientists predict the planet will warm by another 1.8 degrees Celsius by the end of this century), the series of notes representing those temperatures may go beyond the range of human hearing. You will note that as pitch gets higher (with rising temperatures), the notes get harsher, offering a perfect analogy to human life on an excessively warm planet. It is also very appropriate to note that climate scientists also call for severe and catastrophic weather events that could threaten human existence at those temperatures.

Kudos to Crawford and his attempt to give the climate change dialogue a new perspective.