How A Place At the Table Is Stopping Hunger in America

Last updated on by Pattie Kettle 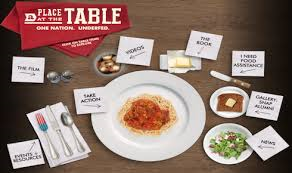 According to recent statistics, there are over 50 MILLION AMERICANS who have no idea where their next meal will be coming from.  The United States of America is one of the wealthiest nations on the planet and, according to A Place At The Table and compassionate sense, this is disgraceful.

1 in 4 of Americans who are uncertain when or if they will have a next meal are children.  Hunger is a complicated issue, but it is also one that is solvable – if the American public finally decide to make it a priority. A Place At The Table is doing just that – telling stories of hunger in America so that people will easily understand just how complex and pervasive this modern-day problem is.

The lynch-pin of the entire public awareness campaign is the 2012 documentary film directed by Kristi Jacobson and Lori Silverbush.  The film, which Variety says is “an engaging and enraging movie that will enlist supporters for its cause,” was released theatrically in the United States on March 1, 2013.  There is also a companion book and an online social media campaign.

The film uses the lens of three individual stories of people who struggle with food insecurity to demonstrate with beautiful simplicity how hunger and food insecurity is something that a) is solvable and b) affects us all.  The stories are about:

Hunger poses a serious economic, social and cultural implications for the entire United States.  If America decides now – as they have in the past – that the problem will be solved and that making healthy food available and affordable is in all of our best interests.  A Place at the Table gives us a true north for getting started on this expansive issue.