Last updated on by Pattie Kettle 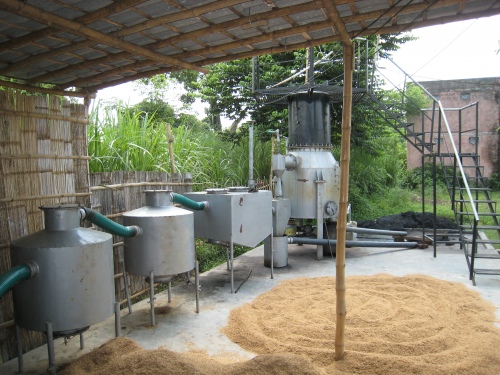 Husk Power Systems is a rural empowerment enterprise which focuses on inclusive rural development on the backbone of electric power.

Unlike other sustainable electricity efforts in the world, Husk Power Systems creates a self-sustaining ecosystem in the villages it serves.  By doing this, it enable economic development along with environmental protection, providing physical well-being and strengthening rural communities.

HPS strives to touch more than 10 million lives over the next five years, in rural areas across the world – often those at the bottom of society’s priorities. They are a business of rural electrification which transcends conventional ideas around the delivery of electrical energy to the masses. HPS has created unique, individual models of decentralized electricity generation and distribution which can be well managed by locals on-site using local resources. It’s a modern way of bringing the age old wisdom of self-sufficiency of villages to life – sustainably.

Its end-to-end renewable energy solutions are creating a revolution in progress which attempts to bring the worldwide impoverished and under-served rural populations from the bottom to the top of the list of world priorities. By channelizing the largely dissociated efforts of a variety of stakeholders – communities, investors, businesses, entrepreneurs, government entities and society at large, it aims to deliver electricity worldwide on a pay-for-use basis.

How it works is by installing 25-kW to 100 kW ‘mini power plants’ and then wiring villages and hamlets of up to 4000 inhabitants to deliver electricity on a pay-for-use basis.  It does this by using a biomass gasification based proprietary electricity generation process.  This process generates electricity using 100% producer gas based system (‘single fuel mode’). By distributing electricity directly to households and small businesses, it keeps costs low by  running insulated wires along bamboo poles to subscribing households, businesses and farms.

In just 4 years, HPS has installed 84 mini-power plants, providing electricity to over 200,000 people spread across 300 villages and employing 350 people operating across the state of Bihar.  Each plant can serve around 400 households which annually saves:

HPS creates an ecosystem around each plant by providing income generation opportunities to local farmers and entrepreneurs.  It promotes economic development by enabling businesses to stay open after dark and allowing children to study at night.  Additionally, it creates employment through its livelihood programs such as the incense stick manufacturing program – which largely employs local women.  This provides sustainable development within the communities Husk serves.

Gyanesh Pandey is the founder of Husk Power Systems.  Pandey works in an areas where the government of India as well as the private markets have failed. By experimenting with anything and everything in order to become successful.  The fuel source they finally settled on is rice husk and their pricing models and governmental partnerships are equally innovative.  The company has a variety of capital providers to support their enterprise as the business plan evolves quite quickly.  One of the primary challenges is to get investors to align themselves with the ultimate objective of Husk Power Systems.  In other words, embracing a long, slow growth process.  The key to sustainable success in poverty-stricken areas is understanding that the process is not going to be a start-to-finish, 3-year business plan.  Sometimes, it can be much, much longer.  The payoff, however, is incredibly worthwhile.