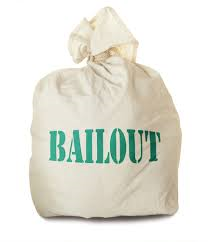 Head honchos at the Big 3 American Oil Companies gathered in the Capital this weekend to meet with their key lobbyists with one demand- a government bailout.

The CEOs seemed agitated with the recent growth in renewable energy throughout the United States, while speaking to the press. Visibly distraught, they chirped together,

“Since everyone is talking about equality and fairness now, we are here to protest the unfair regulations on the oil industry.  Simply put, we want a bailout.”

Though the details of the bailout requested are not clear, internal sources reveal there are some serious concerns over the rising popularity and large-scale adoption of renewable energy:

Recent reports show that Americans are using less gasoline every year and in 2012 we have seen a 6% reduction from peak levels in 2007. Apart from that, the executives see an unfair advantage in the way the industry is structured. The spokesperson added-

“Renewable energy from the sun, wind and tides is free and available in plenty. We have to deal with a finite resource – petroleum, that is not going to last forever – we are at a disadvantage here. Even though both industries requires expensive infrastructure, they are not dealing with cleanup costs and fines. The government needs to understand that this is stacked heavily against us. Anything less than record profits will not help us get the bonuses we are used to. This is a serious problem.”

Then there is also the whole public relations thing. The big 3 spend millions each year on PR campaigns to put on a human side to their operations.

“How come those guys don’t spend a $hI# on this stuff and yet nobody can stop talking about how great renewable energy is. This is simply not fair and we need an immediate bailout package to sort these harsh inequalities.”

We contacted Bill McKibben, Founder of 350.org and avid environmentalist about this bailout. He responded only with a snort.

Disclaimer: Its April Fools Day! None of this is real in any way, shape or form. The above post is presented for entertainment ONLY. Hope you enjoyed reading this post as much as we did writing it!