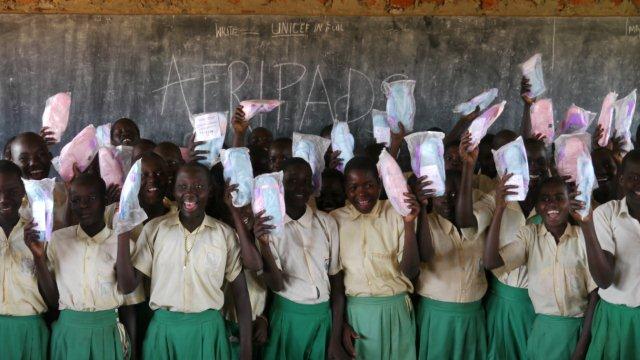 Every 28 days across the globe, half the world’s population menstruates. Yet despite this is one of life’s most natural occurrences, for millions of girls and women across Asia, Africa, Central and South America the high cost of sanitary napkins ensures menstruation is a significant challenge.

The inability to afford sanitary napkins during menstruation means that many of the world’s low-income women are forced to use primitive alternatives, such as newspaper, rags of cloth, bark, ashes, banana leaves, hay or mud, which are both ineffective and unhygienic. All to often these alternatives lead to long-term health risks such as Reproductive Tract Infections, Toxic Shock Syndrome or Cervical Cancer.

The medical implications and unpredictability of alternative sanitation methods, coupled with the widespread societal taboo of menstruation, frequently results in girls skipping school and women missing work. Research indicates that girls in several developing countries miss up to 50 school days annually due to menstruation – in rural India alone a shocking 300 million girls and women are under monthly house arrest.

For the average woman living in poverty the lost work due to ineffective menstruation options amounts to five years of unearned wages over a lifetime – income that could otherwise be put towards much needed family healthcare, education or food expenses.

While new product, service and process innovations in a variety of sectors have resulted in lowered costs for many widely used healthcare products, the humble sanitary napkin continues to remain prohibitively priced.

In a May 2012 TED talk, Arunachalam Muruganantham, also known as the ‘Menstrual Man’ in India, mentioned that there are limited innovations in menstrual products because the machinery necessary to convert fiber used in sanitary napkins into absorbent cellulose costs more than half a million U.S. dollars. For most entrepreneurs this is simply an unmanageable cost, despite the potential long-term social and commercial impact.

Now more than ever the global sanitary napkin industry is ripe for disruption. The emergence of various innovations across the globe addressing the high-cost – and subsequent health and income risks – of sanitary napkins signals that the ‘Female Sanitary Revolution’ is gaining momentum.

In India specifically, Muruganantham and his company Jayaashree Industries is a strong example of the growing ‘Female Sanitary Revolution’. Recognizing that the root cause of sanitary napkin expense is the fixed production cost, he has created a sanitary napkin-making machine to produce quality products at a lower cost to the consumer.

Muruganantham said that his investigation into sanitary napkins began when he realized that his wife used rags during her periods, as buying napkins meant no milk for the family. He tried various techniques for creating a viable sanitary napkin alternative but lacked willing research candidates as neither his wife, nor the girls at the local medical college, would give him honest feedback.

Finally, after using goat’s blood and a plastic bag as an alternative uterus, Muruganatham developed a pilot handmade pad, which he then distributed for free to college students for test subjects. Gathering insights from the pilot, Muruganantham was able to develop a simple machine to make viable sanitary napkins.

Today the Jayaashree Industries sanitary napkin machine is powered by electricity and foot pedals and can make 1,000 napkins a day for as little as Rs 16 per 8-pack. However, rather than selling the sanitary products commercially, Jayaashree Industries helps rural women buy one of the machines, at a cost of approximately Rs 80,000, through NGOs, government loans and rural self-help groups.

This approach has enabled the creation of multiple women micro-entrepreneurs now empowered to create awareness about the benefits of using sanitary napkins, thereby increasing the impact of Jayaashree’s innovation. Since inception, Jayaashree Industries has sold more than 745 machines across 23 Indian states resulting in approximately 3.5 million women now wearing comfortable and safe sanitary napkins.

Another early-stage Indian enterprise, Azadi, is also well placed to disrupt the sanitary napkin industry with their product. Azadi has developed a 100% biodegradable sanitary napkin that is 43% cheaper than the average retail price point. As a result of the high commercial and social potential of their innovation, the Founders, Dhirendra Pratap Singh and Ameet Mehta, have already raised US $115,000 from angel investors and Chicago-based incubator, The Impact Engine.

Recognizing that reaching low-income markets can be challenging, Azadi plans to distribute through two main channels; selling to organisations that already have access to rural distribution networks as well as harnessing a network of Indian female entrepreneurs to sell the pads themselves through a direct selling model. To identify and train these entrepreneurs, Azadi will partner with mission-aligned Community Based Organizations (CBOs) who work in the areas of health and hygiene, reproductive health, microfinance etc. In five years, Azadi aims to build a network of over 13,000 female entrepreneurs who will directly reach 4 million rural girls and women.

By forming profitable partnerships with local organizations to market, manufacture and sell affordable pads to their communities, Azadi believes that the impact of their innovation can be multiplied with each partnership having the potential to change 100,000 lives. In five years, Azadi aims to build a network of over 13,000 female entrepreneurs who will directly reach 4 million rural girls and women.

Beyond India, a number of forward- thinking approaches exist to address the sanitary napkin challenge through for-profit innovations.

Ugandan based startup AFRIpads enlists unemployed Ugandan women to manufacture low-cost reusable cloth sanitary pads, which are uniquely sold as part of a menstrual kit containing a holder, pads and bags for used napkins. These kits are priced at approximately 20% of the total cost of a one-year supply of commercial sanitary napkins. Moreover, since the pads are washable and can be reused for up to one year the product is both affordable and environmentally friendly.

A further low-cost alternative to sanitary napkins is the menstrual cup – a cost-effective sanitation solution that can be reused for a period of 10 years.

Kenya is a global leader in the menstrual cup solution, having done an accessibility study of the acceptance of the innovation in low-income communities. Recognizing this, early-stage enterprise Ruby Cup established themselves in 2011 and developed a menstrual cup both leveraging the insights from the study and through direct product development. Ruby Cup is now partnering with NGO networks across Africa to distribute their product and has recently started to sell Ruby Cup at conventional retail outlets, such as pharmacies. Ruby Cup also sells the product worldwide through its online shop.

From these innovations, it can be seen that to create a world where 100% of women use sanitary menstrual solutions, the key challenge, especially in India continues to be distribution. Both Azadi and Jayaashree Industries demonstrate that for the impact of affordable sanitary napkins to be maximized, the focus needs to be on partnerships with local organizations.

AFRIpads and Ruby Cup further showcase the need for solutions that are not only affordable but also environmentally sustainable. Both, the re-usable menstrual kit and the menstrual cup are long-term solutions that will not create new problems of waste disposal and pollution for communities that adopt them.

Importantly, all of these innovations recognize that to fuel the ‘Female Sanitary Revolution’ it is necessary to educate and empower women. Whether it be by training unemployed women to make menstrual kits or by going a step further and setting up women-led micro enterprises that market, manufacture and sell sanitary napkins, these organizations are slowly changing the perception that women should be ashamed about menstruation.

To ensure that the ‘Female Sanitary Revolution’ continues to gain momentum, it is vital that the business models of early-stage organizations such as Azadi, AFRIpads and Ruby Cup be refined and developed so that they can be scaled globally. Innovation accelerators, such as Ennovent, play an important role in this regard as they provide the integrated support of mentors, investors and experts required to grow operations and scale impact.

Despite the challenges, as we celebrate Women’s Day globally, it is heartening to note that the ‘Female Sanitary Revolution’ has indeed started. These solutions both enable women to better manage their menstruation, and empower them to freely pursue life’s opportunities and contribute actively to the social and economic growth of their communities.

Ennovent accelerates innovations for sustainability in low-income markets. We work with a global network to discover, startup, finance and scale the best innovations. We envision a sustainable future for low-income people in developing countries. www.ennovent.com
Within Ennovent, Perzen supports the strategic development and execution of the organisation’s communication. She has a strong interest in all things entrepreneurial and is passionate about communicating with people from different cultures, hosting and executing corporate events, and writing.