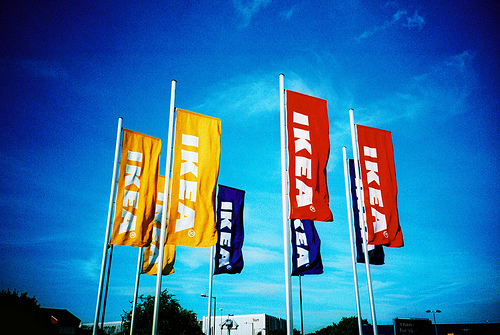 IKEA already counts itself as the world’s largest retailer of home furnishings and, with a recent announcement, looks to become one of the largest solar energy producers and consumers in the United States. The company has long marketed itself as an eco-friendly alternative to many other “big box” stores, and it has spent the last several years deploying solar energy panels to the rooftops of its stores and distribution centers. With two new solar panel installations, announced in early June, the company will increase its solar powered U.S. presence to 89 percent.

The company’s second-largest distribution center, located in Westhampton, New Jersey, is the company’s next site of solar panel installation. The construction project for this distribution center finished in 1992, making it one of the earliest American distribution locations for the Swedish company. The 1.2 million square feet of distribution space, covering 63 acres, will be powered by a staggering 562,000 square feet of solar panels. That adds up to more than 15,000 individual panels, producing more than 2.65 million kilowatt hours of renewable energy per year.

The Bergen County construction project to install these panels will help to radically increase IKEA’s solar presence in the United States, and the project is pretty impressive. However, compared to what IKEA’s doing in Perryville, Maryland, the project is actually only of modest size.

Perryville, Maryland, became the site of an IKEA distribution center ten years after the construction of Westhampton’s facility finished. Opened in 2002, the Perryville distribution enter comes in at 1.7 million square feet, of which 800,000 square feet will be filled with solar panels. That makes the Maryland facility home to more than 18,500 individual solar panels producing 3.28 million kilowatt hours of solar energy per year.

IKEA operates a mere 44 locations nationwide in the United States, of which 17 have already been converted to full solar power via rooftop installations. Twenty more projects are underway to convert most of the company’s existing retail outlets and distribution centers to solar energy in the very near future. It’s an admirable project, and one that puts the international retailer well ahead of its competition.

With the completion of its 20 projects currently in progress, as well as the ones recently announced in New Jersey and Maryland, the company will have a full 89 percent of its American presence running on renewable energy in just a few months. There’s really nothing else like it in the country, as most big box retailers remain firmly committed to non-renewable energy sources to run their operation.

A Commitment to Eco-Friendly Living and Shopping

One of the hallmarks of the IKEA shopping and buying experience is that the company has always been committed to eco-friendly solutions. It proudly declares that its products are renewable and that the company “loves wood” (though that is a whole other story). They also love solar power, and they’ve long sold solar powered outdoor lights and decorations that help ease the burden on utility companies and fossil fuels.

The solar panel installation at all of the company’s 44 locations nationwide is the next step in a grand plan to show the world that a multi-national company can be competitive, affordable, and profitable, while respecting the environment and committing to environmentally-friendly solutions. Given the distinct lack of eco-friendly competitors that have stepped up to the plate and challenged IKEA for the title of “greenest home furnishings company,” it’s likely that the Swedish retail giant will continue to experience unrivaled success in this area.

Some rights reserved by slimmer_jimmer