Last updated on by Veronica French 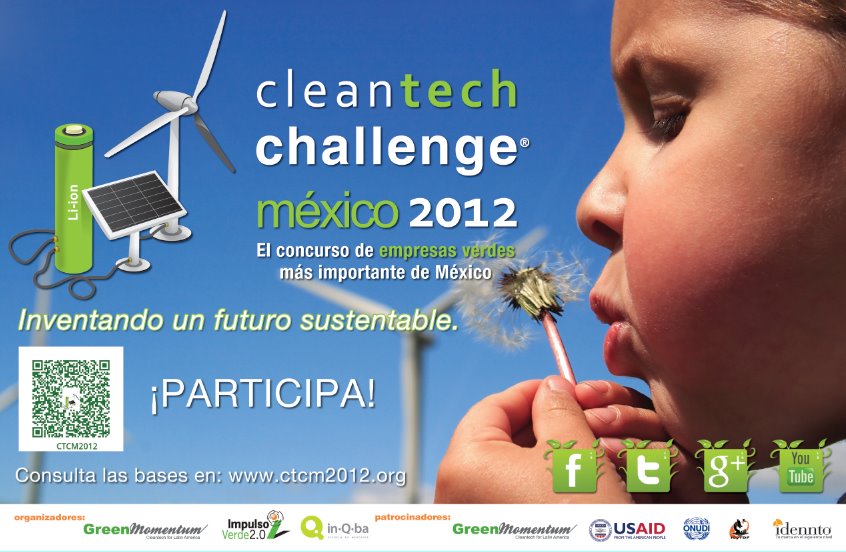 San Francisco has it, so does Boston, London, Australia and South Africa, and now Mexico. Cleantech competitions have turned into a global trend over night, creating a forum where entrepreneurs can showcase their inventions, share ideas, learn from their peers and experts, and best of all, get financed. In its third edition, the Cleantech Challenge Mexico seeks to once again support Mexican cleantech and green entrepreneurs to kick-start their businesses.

Since 2008, Cleantech Challenge Mexico selects the top 128 green companies to compete head to head in a series of elimination rounds. The eight finalists present their project proposals to a group of nine funds and VC investors in the hopes of receiving up to $30 million dollars in investment. The final winner receives $25,000 dollars in cash.

“After the 2008 financial crisis, we started the Cleantech Challenge Mexico in order to directly contribute to the reactivation of Mexico’s economy,” said Dr. Luis Aguirre-Torres, CEO and President of GreenMomentum, Inc., primary sponsors and organizers of the Cleantech Challenge Mexico.  “Inspired by the United Nations’ Green New Deal, the CTCM arose as a vehicle to promote sustainable development in Mexico. For this reason, it also has a social, economic and environmental component, which makes it not only a unique initiative in Mexico but also in all of Latin America.”

Since its creation, the Cleantech Challenge Mexico has received support from international development organizations including USAID and UNIDO, as well as various Mexican government agencies.  This year, FEMSA, the world’s largest Coca-Cola bottler, Environmental Resource Management (ERM) and IBM, are also sponsors of the Cleantech Challenge Mexico.

“During its first two years, Cleantech Challenge Mexico has contributed to the creation of 800 new green jobs, as well as 70 new Mexican cleantech companies. In terms of the environment, it is estimated that the 300+ companies that have passed through the CTCM process will contribute to a reduction of over 10 million tons of CO2 in the next five years.”

The Cleantech Change has seen a variety of green projects over the years, from biodegradable diapers to online carpooling systems. Last year’s winner was Carbon Diversion, a company based in Guadalajara that uses waste material from tequila production factories and processes it into biomass, a replacement for coal. Now, Carbon Diversion’ biomass is used in industrial ovens across the country, including CEMEX.

As of May 21st, the Cleantech Challenge Mexico 2012 will announce the 128 selected green companies. Over the next six months, the companies will compete as well as take part in up to 150 hours of workshops and seminars.

I will be continually reporting on the competition’s advances, so stay tuned!