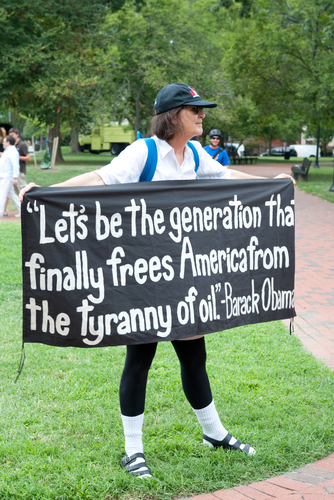 “Contrary to the claims of the U.S. Chamber of Commerce, American Petroleum Institute and other pipeline advocates who threaten political retaliation if the pipeline is not approved, Keystone XL would not deliver on jobs, energy, safety or economic competitiveness.”

Most of the oil that Keystone XL would carry from Canada to the Gulf Coast of Texas is destined for export, and the jobs the pipeline would create would be just as fleeting. The State Department estimated the pipeline construction workforce at 5,000 to 6,000 workers and as the Vice President of Keystone Pipeline for TransCanada told CNN, long-term jobs would be in the “hundreds, certainly not in the thousands.”

Keystone would deliver far less bang for the buck when it comes to job creation than alternative energy. A dollar of spending in clean energy generates three times as many jobs as a dollar spent on oil and gas, according to U.S. Commerce Department data.

Tar Sands Fuel is A Boon for Oil Companies, Not for America

Keystone is a boondoggle for oil companies, not an investment in our nation’s economic competitiveness. Keystone will leave us even further behind Germany, China and other countries that are dominating the rapidly growing global clean technology market.

Keystone would increase the kind of catastrophic environmental risk the World Economic Forum warns about in its just released Global Risks 2012. Keystone oil will be extracted from tar sands and its carbon emissions are 82% greater than the average crude refined in the United States, according to the Environmental Protection Agency. Keystone will increase carbon emissions and environmental risk. The pipeline would threaten the Ogallala aquifer, a large and irreplaceable supply of drinking water and irrigation in the Great Plains. If this supply were contaminated by an oil spill, the costs to the public and business would be incalculable, and some of America’s most productive farmland would be lost.

Oil for Export Will Not Bring Energy Independence

“Keystone is a sneak attack on American’s wallets. Its real aim is to import oil from Canada, refine it, and then export it to foreign buyers. For most businesses and consumers in the mid-west, the pipeline will serve up higher energy prices and higher food prices, since food prices include the price of energy and oil-based fertilizer needed to grow crops. That’s the last thing we need for real economic recovery.”

“Keystone makes no economic sense for America,” said ASBC co-founder and Director David Brodwin.  “Once we take into account the true cost of oil including subsidies, environmental damage, and military costs, oil is far more expensive than the alternatives.  The best thing we can do for the American economy and for American businesses as a whole is to wean ourselves from oil as quickly as possible.”