Is Clean Coal the Answer? 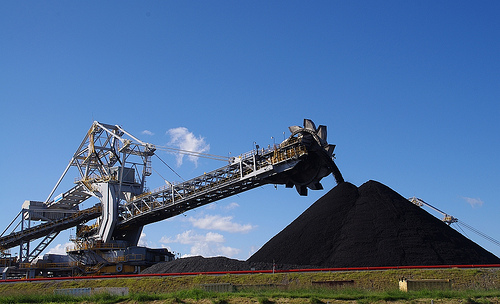 “Coal” is practically a swear word to environmentalists, and with good reason – those four little letters come with a lot of baggage. Coal provides about half of the nation’s electricity, but burning coal releases CO2 and causes global warming. Coal mining in any form is hideous – the mines collapse and kill miners; breathing coal dust leads to black lung disease which destroys miners’ lungs; and mountaintop removal destroys the environment from the top down.

But what about clean coal?

The Global Carbon Capture and Storage Institute recently had its first US meeting in Pittsburgh. They’re a group who wants to speed development of carbon capture and storage technology – essentially, while we can’t stop CO2 from existing, we can corral it and trap it somewhere harmless. It’s kind of like accepting that you can’t stop buying junk, coming up with a vast, expensive organization system, and then stowing it all behind the garage door. Out of sight, out of mind, right?

The supporters of CCS technology have good intentions; if we’re going to be using coal (and it doesn’t look like we’re going to quit anytime soon) then the least we can do is contain our own pollution. One possible way of doing this would be to capture carbon dioxide and trap it deep underground, which sounds neat – but it’s really more of a concept than a reality at this point. It’s unclear whether CO2 that we bury will stay buried, and that’s not even getting into the difficulties in capturing the CO2 to begin with.

Assuming that we can get the technology working, it seems like the best of both worlds: people get to keep using fossil fuels, and maybe we can actually stop global warming. CCS technology is certainly getting support from people on both sides of the issue, including some who don’t show such support for solar or wind energy.

Unfortunately, that doesn’t necessarily mean that CCS has more financial support than other clean energy experiments; its backers are still working to get major support from consumers to help increase their funding. The low funds and the fact that this is a technology still very much in its infancy mean that we’re unlikely to see “clean coal” any time soon.

Compared to other clean energy options, that’s pretty standard. A common complaint about solar and wind power is that they’re just not able to meet our needs yet. Those technologies still seem more viable to me, though. Our future can’t be in fossil fuels because they simply won’t be around forever.

That’s why I’m cautious in my optimism about “clean coal”. As a quick fix, something we use on our way to a more sustainable energy option, clean coal is a great idea – it’s just not viable as a permanent source of energy.