A start-up that drew inspiration from the line in the movie “The Graduate”: “Just one word. Plastics”, and is composed of a team that says their pressure-reducing pump-up song is Katy Perry’s “Firework”, with the opening lines: “Do you ever feel like a Plastic bag?” is surely obsessed with plastic.

cycleWood Solutions Inc. was formed in July 2010 by four graduate students at the University of Arkansas, who launched a startup company that would manufacture biodegradable plastic shopping bags. They harness the technology developed by University of Minnesota biochemist Simo Sarkanen, The founders formed the company after creating a business plan around the technology for an entrepreneurship class, whose aim was to build a viable business. 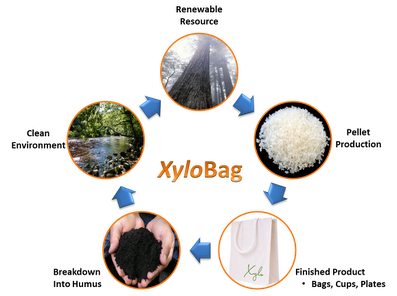 The team found the technology, a lignin-based biodegradable plastic, on the University’s Office for Technology Commercialization’s website. They then completed an option agreement for the technology, and later licensed it to launch the startup. Their website says,

Using our patent-protected technology, cycleWood Solutions Inc. is poised to offer a sustainable solution to conventional single-use plastic bags. One million of these bags are consumed globally every minute!  Domestic consumption amounts to 100 billion bags and a $4 billion industry. This has caused consumers and governments to demand sustainable alternatives, and our solution, the XyloBag, offers such retailers and consumers a cost-comparative, environmentally friendly alternative. Our bag, utilizing an abundant natural resource, biodegrades in 150 days once it reaches the natural environment.

According to Nheim Cao, president & CEO, this is a viable alternative for discarded plastic bags that will sit forever in landfills, some will pollute the world’s oceans and landscapes as litter and less than one percent will be recycled. Cao hopes cycleWood will be part of the solution to this problem.

The patent-protected biodegradable and compostable thermoplastic can be applied in a variety of commercial plastics, including cups, plates, and bags. The benefit of using our technology is that in 150 days our thermoplastic breaks down into humus, improving soil structure and leaving a cleaner environment.

Although details are not yet finalized, Cao anticipates the startup will provide the product at a slightly higher price point than traditional plastic bags but still be a substantial savings over biodegradable options currently available. Several corporate retailers have already indicated interest in the bags. There are also talks of developing biodegradable bags for yard waste but the startup’s first priority will be to get investors on board and initiate a manufacturing strategy.

cycleWood last week was named regional champion in the 2011 Cleantech Open Business Competition, and will go on to compete in the national competition in November. Here is wishing the cycleWood team the best in their future endeavours!