Last updated on by Glenn Croston

Water is an important issue globally, and with the world’s population hitting 7 billion this year and the impact of climate change growing, water will only grow in importance.  But the need for clean water and sanitation is not a new problem, and some wonder why the rate of progress seems so slow.  As the CEO of Water for People, and as someone who was worked globally on delivering clean water to people for many years, Ned Breslin is creating new solutions for this old problem. 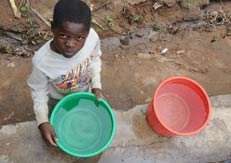 For decades now an aggregation of non-profits, foundations, government groups, and others have pursued a variety of tactics to deliver water, but the progress can seem frustratingly slow. “The effort is chaotic,” said Breslin, describing the efforts of the many parties involved in the global water challenge.  And the results are not always what they could be.

Water for People works in 11 countries in Latin America, Asia, and Africa with the belief that everyone should have clean, safe water for drinking and sanitation.  It is a simple belief with the prospect to make a profound difference the lives of a great many people.

One of the challenges with efforts to improve water supplies has been a tendency of groups to focus on the initial installation of projects and then move on.  After the initial pictures of water flowing and happy people, attention wanders off to the next project down the road. The result is often broken water projects, and wasted investments.

“People come in, do a project, and then leave,” said Breslin.  Installing the project is only the first step though. “There are abandoned projects everywhere.  Keeping the water flowing takes money, work, and a continued presence.  The day the water first flows is only day one.”

To solve this problem with the long-term performance of water projects, Water for People is measuring not just projects but outcomes, and to measure this they have incorporated long-term monitoring.  Independent monitors visit their projects once each year, usually at the end of the dry season when the water system is under its greatest stress, and the projects they install are to be tracked for 10 years to make sure they’re still working.

“Technology helps to make this possible,” said Breslin. They have devised a system called FLOW in which data on water projects can be collected on phones, including GPS location. The data is uploaded to Google, and tracked on a map.

With groups like Water for People leading the way, there will be more pressure for the field as a whole to show concrete results in the push for clean water. “Philanthropists are asking harder questions, pushing the move toward transparency,” said Breslin.

The importance of water in the lives of people everywhere means that efforts to improve water won’t go away. Solutions are possible with better information, honest discussion, and measurement of outcomes like the work done by Breslin and Water for People.

You can read more about them and find out how to get involved http://www.waterforpeople.org/

Glenn Croston helps green businesses with communications and consulting at www.startingupgreen.com, and is the author of “75 Green Businesses” and “Starting Green”.