SC Johnson will stop using the “Greenlist™” logo in its current form on Windex® products. The company has reached an agreement on two lawsuits regarding use of its logo and the parties have agreed to an undisclosed settlement.

The Greenlist™ logo was intended to signify that the Windex® products had achieved the highest internal ratings according to the company’s patented Greenlist™ process. The lawsuit resulted as plaintiffs opined that Greenlist™ was an internally developed process rather than that of a third-party and that the logo implied the products included environmentally friendly ingredients. 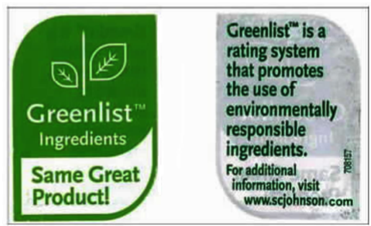 What was the issue with the label?

The label depicts a drawing of two leaves and a stem. On the reverse side of the label, which is read through the back of the Windex bottle, the text says-“Greenlist™ is a rating system that promotes the use of environmentally responsible ingredients. For additional information, visit www.scjohnson.com”. The suits were brought in federal court by Mr. Wayne Koh in California and by Mr. Howard Petlack in Wisconsin in March 2009.

“We decided to settle for two reasons. First, while we believed we had a strong legal case, in retrospect we could have been more transparent about what the logo signified, and second, and very importantly, Greenlist™ is such a fundamentally sound and excellent process we use to green our products, that we didn’t want consumers to be confused about it due to a logo on one product.”

Correct. Without clear communication, internal audits or certifications can amount to greenwashing claims and ruin reputation. Apparently, the company now understand this, evident from this clear line of explanation from the CEO, and is making amends by withdrawing the logo. Kelly M. Semrau, Senior Vice President – Global Corporate Affairs, Communication and Sustainability at SC Johnson noted,

“While companies always try to ensure labels are clear and understandable, different interpretations can arise. We want to simply learn from the experience and move on.”

SC Johnson will continue to use  Greenlist™ in its product development as it continues to strive for better cleaning ingredients. According to the SC Johnson’s press release,

SC Johnson’s Greenlist™ process is an internally developed environmental classification system used to help green the company’s chemistry. It has received numerous external recognitions, including the Presidential Green Chemistry Challenge Award in 2006. In the Greenlist™ process, ingredients are rated according to their impact on the environment and human health. Using this information, company scientists work to select ingredients with “Better” or “Best” ratings when developing new products. When reformulating existing products, they must contain ingredients with equal or better ratings than the original formula. At the end of the day, the goal is to annually increase the proportion of ingredients in SC Johnson products that have the least impact on the environment and human health.

Since the process was created in 2001, Greenlist™ has helped make numerous advances including reformulating cleaning products to cut nearly 48 million pounds of VOCs from SC Johnson products in the last five years alone. Additionally this internal audit system also laid the groundwork for SC Johnson’s ingredient communication program, launched in 2009.

All good things. Third-party certifications and audits are valuable in adding credibility but pasting your own “company checklist” as an approval stamp, however stringent and qualified, can very easily nullify the effectiveness of the program. But all seems to be going well with SC Johnson, as they have learned from this episode, removed the logo, settled the complaint and want to continue their commitment to sustainability and transparency.