Why the Cola Wars on the Better Plant-Based Bottle are Going Nowhere.

Enough has been written about cola-wars and competition between the two cola giants, Coca-Cola and PepsiCo to capture market share. The cola-wars have now extended beyond taste tests, endorsements and Superbowl ads to the “Who has the better plant-based bottle?”

Coca-Cola released its PlantBottle in 2009-

“The “PlantBottle™” uses 30% plant material, is fully recyclable, has a lower reliance on a non-renewable resource, and reduces carbon emissions, compared with petroleum-based PET plastic bottles. The “PlantBottle™” is currently made through an innovative process that turns sugar cane and molasses, a by-product of sugar production, into a key component for PET plastic.” 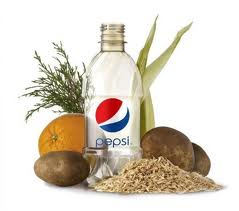 “PepsiCo announced it has developed the world’s first PET plastic bottle made entirely from plant-based, fully renewable resources, enabling the company to manufacture a beverage container with a significantly reduced carbon footprint. PepsiCo’s “green” bottle is 100% bio-based raw materials, including switch grass, pine bark and corn husks.  In the future, the company expects to broaden the renewable sources used to create the “green” bottle to include food waste from its foods business.”

With all this competitive research and spending, both giants have created a product that is identical to petroleum-based PET (polyethylene terephthalate) bottles. This is where the problem lies. The plant-based plastics have the same molecular and physical properties as PET plastic. They are not biodegradable as their chemical composition has been altered to a great extent. They carry with them all the nuisance that petroleum-based plastic does. They can still leach unwanted chemicals into our food, pack landfills and pollute our marine life. The only positive is that they are composed of plant material rather than fossil fuel. But PET unfortunately has a low recycling rate of about 21-27%, so most of the plant-based bottles will join their fossil-fuel filled counterparts in the landfill.

Pepsi might have a slight edge in this war. Firstly, because they have a 100% plant-based product while Coca-Cola still has fossil fuel elements in theirs. Moreover, Pepsi’s bottle is made from food scraps while the Coca-Cola bottle need agricultural resources that is by no means a very eco-friendly option. Agriculture and food crops are becoming more unsustainable every day and can barely be called a renewable source due to its water, land fertilizer and machine intensive production. In fact, this kind of competition over “plant-based” better bottles can actually make the case worse for the environment, where consumers think they are “biodegradable” and become careless with their use. So where are the real benefits?

What should the cola giants be doing instead? They could use their dollars wisely and –