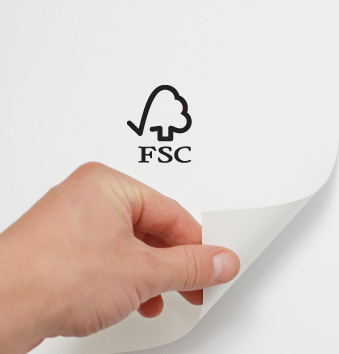 Over the past few years, awareness has grown about FSC-certified papers and printing.  FSC stands for Forest Stewardship Council, a group that works to ensure that the materials used are sourced responsibly.  Each step in the chain (i.e. from forest to printer) must be traceable.  The intent of the FSC system is to eliminate habitat destruction, water pollution, displacement of indigenous peoples and violence against people and wildlife that can accompany logging.

I base my assertion on a lot of anecdotal evidence I have seen in the field, both from printers, and especially from marketing professionals and print buyers.  Back when I started conducting green marketing seminars (and writing on Sustainable Ink) in 2007, there was growing interest in FSC, and a sense that it would become the industry standard, on the level of recycled paper.  It was on its way there, but I believe it was hurt in three major ways:

In some sense, printers have been FSC’s sales force.  Once printers became certified, they sold FSC as an incredibly valuable brand, and one that all companies that wanted to send a green message should strive to put on their printed pieces.  Now that many of these smaller printers have declined to renew, FSC has lost a powerful constituency that will not continue to spread the word about FSC.

One other constituency FSC has partially alienated is designers, due to their strict rules around usage of the term “FSC.”  Several years ago, if an organization wanted to explain their green choices with words instead of symbols, they were allowed to do so.  As an example, if they printed a brochure on Neenah Environment PC 100, one of my favorite green papers made from 100% post-consumer recycled content, at an FSC-certified printer, they could use a simple sentence like “Printed using FSC-certified 100% post consumer recycled content.”  Now FSC no longer allows this, and insists that the term “FSC” only be used along with its official logo.  FSC is clearly trying to build awareness of its brand, but this shouldn’t be the responsibility of the end user.  I have seen this rule cause designers to sacrifice the use of the “FSC” term.

FSC is a worthwhile organization, and serves a good cause.  However, I believe its lack of obvious green benefits relative to other green elements like recycled paper is hurting adoption.  More than that, however, are the large fees charged to FSC’s sales army (printers) during this recession.  Those, coupled with strict rules around design, are a sign that FSC may have overplayed its hand in the marketing communications industry, and its best days are behind it.

This post is written by Ben Grossman. It originally appeared on Sustainable Ink and was cross-posted with permission.

Ben Grossman is Co-President of Grossman Marketing Group. He and his team work with clients to help them identify environmentally-conscious business practices as a way to differentiate them from their competition and establish a competitive advantage. Ben has worked as a strategy consultant to Fortune 500 clients and was the 2009 recipient of the New England Direct Marketing Association Prodigy Award, a prestigious marketing award for young professionals under 30.